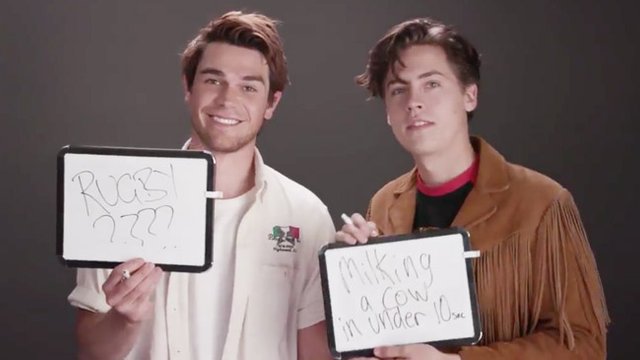 "What is KJ's secret talent? He has no talent."

Jarchie shippers, you're dreams have finally come true: Cole Sprouse and KJ Apa from Riverdale got together to discuss their bromance and it's fucking wild.

In a hilarious video for Netflix, armed with white boards and pens, the Riverdale guys are tasked with answering questions about each other to see if they get the same answer, thereby proving their undying love for each other. And you know what, they don't perform badly!

Among the questions they had to answer were such gems like  'what is KJ's secret talent?', to which Cole replies "KJ has no talent." BURN! Then they're also asked 'what is the way to Cole's heart?' KJ's response? 'Ciggies and pugs'. Guess we'll have to take a trip to the kennels later to see if they've got any spare pugs going, eh?