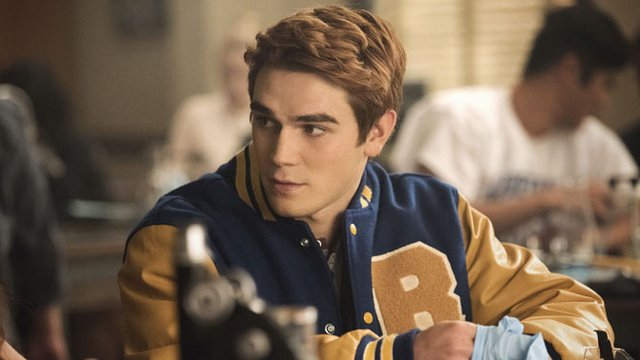 The huge scene was written in at the last minute.

If you're anything like us, you're probably still reeling from Riverdale's explosive season 1 finale. Nothing could have prepared us for how the CW show's first season ended, but the promise of season 2 is giving us a glimmer of hope for one of the show's main characters.

When we last saw our Riverdale heroes, Fred Andrews was bleeding out from a gunshot wound in Pop's Diner (of all places). Archie's dad was the victim of a robbery gone awry (as far as we know) and it was certainly the perfectly cliffhanger designed to leave us craving season 2.

However, KJ Apa just revealed that the season finale was almost a completely different thing.

"We had a completely different ending while we were shooting," KJ Apa said. "Only me and Luke got sent the ending the night before we shot that scene."

It sounds like initially the ending was written as something else, but ramped up after a more dramatic re-write. When you think about how the scene was set up, it makes total sense that the dramatic ending was changed to add more suspense.

When pressed for more details on the alternate ending, KJ cryptically answered "something with the Blossoms" but there are a few theories floating around about what the initial ending was/should have been.

Director Lee Toland Krieger (who directed the pilot, 102, 103, and 113) said that the ending to this episode with the robbery and shooting was added in very late in the process. As in, they were actually prepping for production and he was already in Vancouver when RAS and the writers changed the ending. He said originally it was going to end with Archie waking up and sneaking out of Veronica's room to find Hiram there. Obviously the new ending is much more suspenseful and adds more momentum going into the second season, but I wonder why they changed it so late in the process!
via reddit user sinterrante

Theory 2: Cheronica rises from the ashes.

Theory 3: This author's theory about how it should have ended
Josie and the Pussycats play a jazzy song while FP and Fred Andrews perform a shirtless tap dance duet. Archie proudly watches on with his girlfriend, Valerie. While watching his topless father, Archie finally realizes that his own desire for a music career is kind of dead and that his father is the real star in the family. Archie drops out of school to manage Andrews construction and Fred (who was never shot) moves to Hollywood to star in La La Land 2. We literally never hear from the Blossoms again.

(If you're reading this, Riverdale writers, CALL ME. I've got great ideas.)