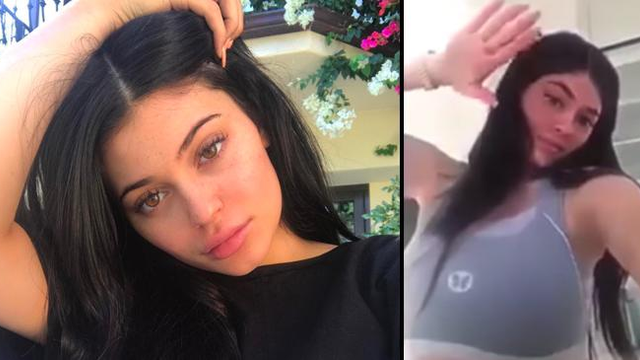 Ever since news broke of Kylie Jenner's alleged pregnancy, the internet hasn't stopped. Fans were sent into overdrive and have been sleuthing on every single aspect of Kylie's social media presence to try and confirm the news before Kris Jenner gets her hands on the big red button.

Kylie's been a lot quieter on social media over the past few weeks but is still continuing to post her usual Snapchats. But a few days ago, she uploaded one and then immediately deleted it a few seconds later. Of course, it didn't go un-clocked and someone managed to record it. Now, they're freaking out because they think it looks like she just unintentionally gave everyone a glimpse of her bump.

Here's the 10 second clip that's got everyone shook. You can make up your own minds over whether or not she "revealed" her bump.

Comments under the video are a mixed bag. From people saying they can clearly see a "bump" of some sort (how?!) with others commenting on how big her boobs have got (she's wearing a sports bra which automatically squashes your boobs and makes them look a lot bigger) to fans saying they're waiting for conformation before anything else.

Kylie (and Kris Jenner) are of course yet to confirm anything about her alleged pregnancy but she's been doing a fair amount of teasing on her own Snapchat about it in the past few weeks.

There have also been reports that she's been dropping THOUSANDS of dollars on baby clothes and accessories but then again, it could all be for her sister Kim's new arrival? Who knows. Find out what happens next week on Keeping Up With The Kardashians.

QUIZ: How would you die in The Hunger Games?