Wait, Does This Mean Leslie Jones Will Be Deadpool’s Next Sidekick? 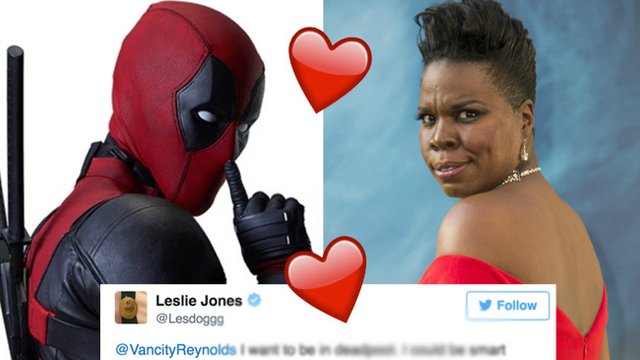 Leslie Jones has made no secret of her love of Deadpool and now she's gone one step further in her attempts to land a role by arguing why she should be Deadpool's next sidekick on the Late Night with Seth Myers show (31 Dec). Watch the clip below.

In the interview with Seth, Leslie doesn't hold back on why Ryan Reynolds should tap her for the role of Deadpool's sidekick. She starts by describing Reynolds as "one of the finest specimens". Lol! A little bit of flattery won't do you no harm, I guess!

Leslie goes on to flesh-out her character. "In Deadpool I would love to be just the sidekick. Just feeding him back the lines. It would just be so fun." Her superpower would be 'loudness' so when she shouts, "everybody’s clothes just come off em". So long as she uses her power against Reynolds at least once then we will be happy with that.

It's not the first time Leslie has spoken about Deadpool. Back in December she tweeted about wanting a role in the film

@VancityReynolds I want to be in deadpool. I could be smart mouth side kick. And my power would be loudness!!

We're definitely ready for this to happen. Deadpool 2 doesn't begin filming until June so there's still time. Someone slide into Ryan's DMs and hook Leslie up right now!

Should Leslie get a role in Deadpool? Let us know in the comments.