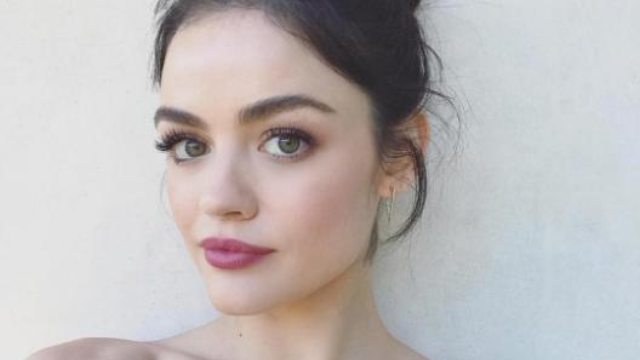 Lucy asks her fans to forgive her after an unfortunate choice of words.

Lucy Hale has issued an apology after a comment she made over the weekend caused some controversy. Lucy found herself facing major scrutiny after writing that she was "so fat" under her Father's day throwback photo.

Fans objected to the fact that Lucy is actually quite thin (and always has been), but also to the negative tone she took when calling herself overweight.

The Pretty Little Liars star took to Twitter and offered a heartfelt apology to fans for her choice of words.

Sometimes I forget that people are watching everything I do and I say things I don't mean. I'm extremely sorry if my comment about my weight

Offended anyone. Sometimes we can be our own worst enemy. I know people look up to me and I should be way more aware of what I say sometimes

Thanks for all the love and support. Hope y'all can forgive me !

We all make mistakes and Lucy definitely did the right thing by apologizing and acknowledging that her words may have been hurtful to some of her fans.

The Instagram throwback photos were in full force over the weekend as celebrities (and non-celebs!) posted sweet Father's Day messages.

Pretty Little Liars actress Lucy Hale joined in on the love by wishing her dad a happy Father's Day.

You taught me to have soul. I love you daddy.

Lucy's message to her father wasn't controversial, but something she said in the comments of the photo isn't sitting right with a lot of people.

The actress made a comment about her "throwback" photo body which people are pretty unhappy with.

In a reply to a friend, Lucy calls herself "so fat" (most people would not consider her overweight in the photo) and says "ugh" to describe how she felt about her body.

People have started leaving replies to Lucy's comment, wondering how she could think she was overweight in the photo.

And others are admonishing the actress for a poor choice in words, especially as a lot of young women with different types of bodies admire her.

Based on what we know about Lucy, we're sure she didn't mean to offend anyone with her words. Unfortunately, it is pretty easy to see how someone with body image issues could see a thin woman calling themselves "fat" and internalize that.

While we're definitely not the speech police, any effort to be careful about the words we use can go a long way. Lucy looks great at any body size, but there is no need to use language that tears down women who are thin, curvy, or in between.