'Mean Girls: The Musical' Just Announced Their Cast & It's So Fetch 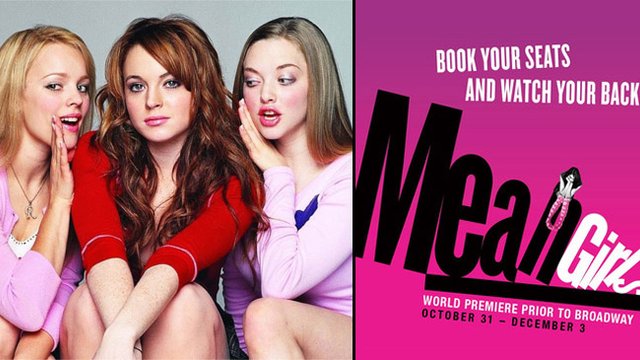 With the show set to debut in October, with a script by Tina Fey, we take a look (and have a listen) to the next generation of plastics! So fetch.

A new generation of plastics has arrived as the producers of the Mean Girls musical have announced details of their cast ahead of the show's debut in Washington on October 31st.

With a script from the movie's writer and co-star Tina Fey, music from her husband and 30 Rock composer Jeff Richmond and Tony-award winning Book Of Mormon director Casey Nicholaw on board, the show is aiming for a Broadway run in 2018.

So, who is taking on these iconic roles? Here's the full lineup so far:

Having recently become Broadway's youngest ever Fantine in Les Misérables, Erika will bring new life into the iconic role that made a star of Lindsay Lohan. And, judging by those huge pipes on display in the clip above, maybe we can expect a heart-rending solo about how she misses her days living in the jungle? Or a homeschool ballad? Time will tell.

Previously seen on TV in NBC's live Peter Pan musical, Taylor already has experience of adapting classic teen movies into hit musicals with her role in the adaptation of cheerleader epic Bring It On. She should be pretty well prepared then to lead the plastics in October.

Recent Broadway appearances include Sunday In The Park With George and The King And I and, as you can see from the above cover of 'Poker Face', she already has great chemistry with Taylor's Regina. Looks like the plastics are coming together nicely. Can't wait for that Christmas number!

The former Rock Of Ages star is clearly at an advantage here as she looks EXACTLY like movie star Amanda Seyfried. No? Just us? We reckon they could be separated at birth. Side note - if there isnt some kind of comedy song about this girl's weather-reading abilities then what's the point of any of this frankly?

Another veteran of movies turned into musicals, Barrett was most recently seen in the critically acclaimed adaptation of 1980s classic Heathers. We can't wait to see her take on Lizzy Caplan's ever-cynical, plastics-hating Janis.

Having recently starred in the funniest musical of all time, The Book Of Mormon, we are pretty sure Grey is gonna nail his part as Janis' sidekick as they convince Cady to take down Regina and co.

Tina Fey was always gonna have a big old pair of shoes to fill but, my word, the casting directors have nailed it by picking the absolute legend that is Ms Butler, star of Catch Me If You Can on Broadway and the hilarious, roller-skating Xanadu. Plus, this girl can SING!

Another Book Of Mormon alumni, do you guys think Kyle has the ability to melt your heart the way Aaron did all those years ago? Judging by the way he belts in that video above, we reckon so.

Other cast members include Cheech Manohar as Kevin Gnapoor and Rick Younger as Mr. Duvall.

So, what do you guys think? Will you be checking out Mean Girls on Broadway? Let us know in the Facebook comments.