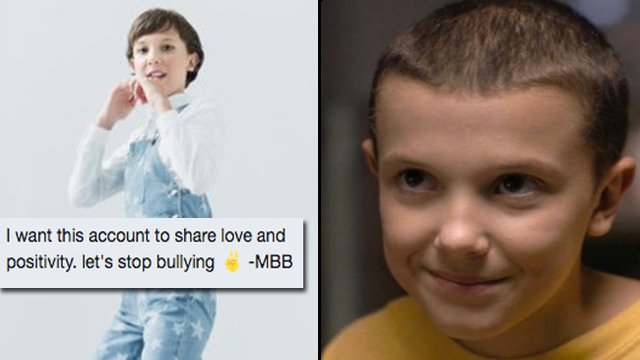 @Milliestopshate will share advice and offer support to people suffering from bullying either online or in real life.

Stranger Things star and EMMY NOMINEE (!) Millie Bobby Brown has come up with a unique way of combating online negativity, setting up a new Twitter account dedicated to all things that are good in the world.

New account sharing love and positivity! Managed by me @Milliestopshate

Designed to share 'love and positivity', the 13 year old actor's many fans have already been showing their appreciation online, with @Milliestopshate gainging over 7000 followers in under a day.

I will tweet encouragement and advice for situations that need love and help.

Thus far, Millie has been using the platform to share stories from bullied kids and adults who had similarly traumatic experiences at school in the hope of opening up a conversation and offering support from a wider community.

Your a strong girl. Remember I'll always support you. https://t.co/cP7DfUwmse

Reply with: screaming is not the answer. I will do as you say if you tell me in an educated and kind way. Love u stay strong https://t.co/bxLg5bWOur

I'm 47, was bullied brutally for 8 years growing up. It was scary and isolating. Love that you're doing this! Hugs to all of you!