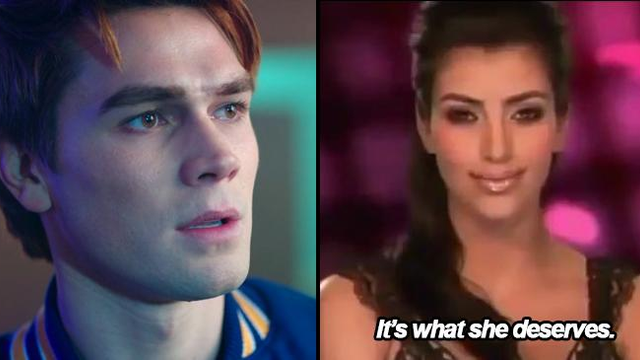 GUESS WHO JUST GOT MURDERED!?

The time is finally upon us. Riverdale is back on our screens, the creepy aesthetic is better than ever and the drama is almost too much to handle. Fred Andrews' life was hanging in the balance for a bit there, Archie is paranoid AF, and Betty & Jughead have still not had sex yet, ok? Stop asking her about it.

Oh, and someone major character DIED at the end of the episode.

Without spoiling too much, Fred's shooter is revealed to be on the run (great job, Sheriff... it's the smallest f*cking town ever) and very much keeping tabs on everyone this side of Sweetwater River... and the other side too.

At the end of the episode, we see a VERY familiar car parked outside a quaint little house. If you didn't already clock where we were and what was going on, it was soon revealed to be Miss Grundy's (!!!!) house where she was ~tutoring~ a young boy. After a quick smooch at the door (pervert), she was promptly MURDERED by the same guy who shot Fred Andrews.

Needless to say, the internet was absolutely LIVING for the gruesome onscreen death of the most hated character in Riverdale.

Oh my lawwwwwd, miss grundy showed up and I'm like, "girl, nobody wants you here" and then THAT happened...y'all I'm shoooooook. #riverdale pic.twitter.com/IW9wTNGoCk

Ms. Grundy was still out there thoting. Guess she done now #Riverdale pic.twitter.com/I2FqZ2n9JN

Me when Grundy came back just to get murdered. #riverdale pic.twitter.com/UxTUuI6jj9

me: why is ms.grundy back, didn't she like get banished from the town?
*sees the end of the scene*
me: #Riverdale pic.twitter.com/d6b6OLC9Fn

Back in August, we asked KJ Apa himself if Grundy would be returning for season two... and his answer? What a sneaky lil' rat!