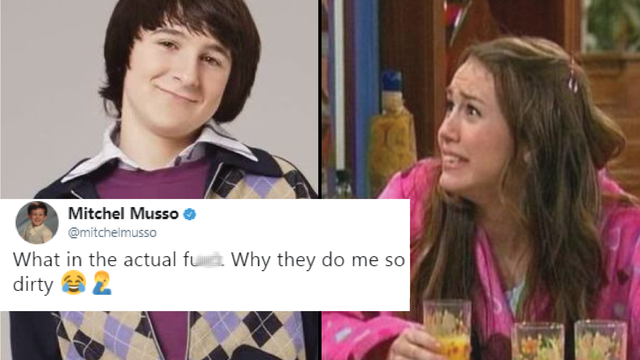 More than a decade after the show's premiere, the actor is looking back and throwing some serious shade at his character's abysmal dress sense (and we can't say we disagree).

fuckin Diamond plaid, double collar, pants like wtf lookin motherfucka and the shoes? What in the actual fuck. Why they do me so dirty pic.twitter.com/ssr7nT2rko

First of all, we're obsessed with "diamond plaid" as a colloquialism for argyle. Second of all, it's pretty clear that no one on Hannah Montana was spared the indignity of 2000s era fashion.

Mitchel's self drag could only be beat by people's hilarious responses to the throwback photo.

Damn bro. They dressed you like you eat dinner at 2:30

Wait you didnt dress like that in real life?!?

this photo just told me we had an essay due last night for class.

People also reminded Mitchel that this wasn't even his worst aesthetic.

Dog u also used to wear button up shirts underneath polos

And, well, you know...diamond plaid.

Dog u also used to wear button up shirts underneath polos

It's all fun and games until they hand you a diamond plaid sweater and the ugliest shoes known to mankind. Speaking as a person who once thought wearing a skirt and jeans at the same time was stylish, there will never be anything quite like 2000s fashion.