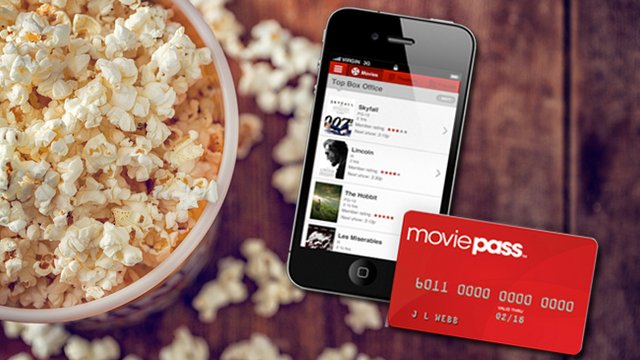 The cinemas may not be happy about it but this is a seriously incredible deal for movie fans.

Potentially great news for movie fans on a budget as the makers of MoviePass have announced this week that they will be dropping their subscription price to just $9.95 a month.

That means, soon, you could be watching UNLIMITED MOVIES, IN A CINEMA FOR LESS THAN THE PRICE OF ONE TICKET PER MONTH!!!!

Just one catch though - some movie theaters are trying to block it from happening!

Mashable reports that MoviePass, a subscription app service that lets you go and see one movie a day at a list of theaters for a one-off payment, have clashed with AMC, the HUGE cinema chain, who released an angry statement following the lowering of the pricing from $50 to just $9.99:

"While AMC is not opposed to subscription programs generally, the one envisioned by MoviePass is not one AMC can embrace. We are actively working now to determine whether it may be feasible to opt out and not participate in this shaky and unsustainable program."

So why are cinemas so angry? Well, if you could pay $9.99 to see all the movies you wanted, would you really bother to pay $15 for a single ticket anywhere else? That can't be too good for the theater business at large.

Plus, it turns out they didn't like this idea from the start! In fact, most cinemas didn't want to work with the app so MoviePass came to an arrangement with a credit card company that purchases the tickets at full price on behalf of users, basically letting them use the app to get into screenings without the cinema's knowledge.

Perhaps the bigger worry then is that if these cinema chains want to launch their own subscription service in the future, they will be undercut by MoviePass who, somehow, have managed to keep their prices extra low.

Either way, if you love movies and have no cash, you may be about to get a pretty sweet deal one way or another.