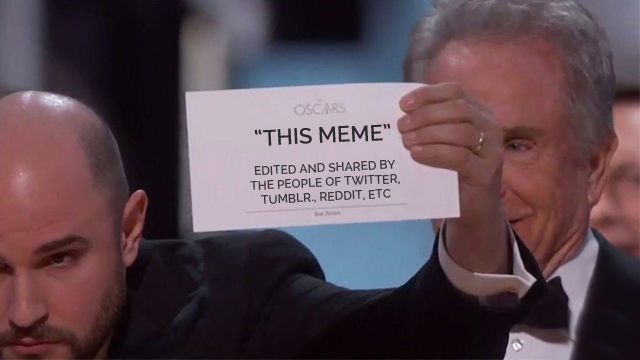 "La La Land" getting snatchedt has birthed one of our favourite memes of 2017.

Unless you slept through it, you should know by now that the ending of last night's Academy Awards was wild.

the guy in charge of the envelopes at #Oscars right now pic.twitter.com/UCCXGvp2uh

An envelope-based mix-up resulted in La La Land being wrongly announced as winner for Best Picture - instead of the real winner, Moonlight.

Rightfully so, the internet completely lost its sh*t and the memes have been flowing ever since.

meryl streep's face from that backstage #oscars feed when she realized what was happening with moonlight is hilarious pic.twitter.com/vivnECpMHj

But the most important part was when La La Land producer Jordan Horowitz held up the card with the real winner on it.

And reminded us all exactly what happens when anyone holds up a piece of paper on the internet.

Has anyone done this yet pic.twitter.com/zTK1t0hI4D

incredibly, i remade the title card and have just now realised that i managed to upload the wrong mp4 pic.twitter.com/iCscBo7kKV

But even though he won Meme Of The Night, we do have to give shouts to Horowitz for handling the whole goof-up as classy as anybody possibly could.

Thank you, Barry. Congratulations and much love. https://t.co/BSwk9T6Si4

Congrats everybody, and thanks for feeding the meme machine once again.

Guys it's ok, we've worked out what actually happened at the mix up from the #Oscars pic.twitter.com/2epu3lLwAZ