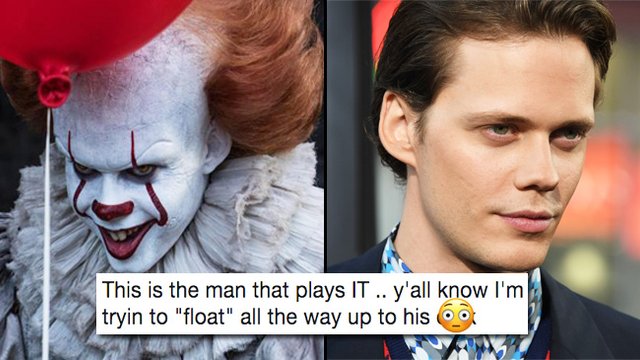 The internet has finally discovered Bill Skarsgård in all his glory - but does he really look better with the make up on?

By now you'll have no doubt been terrified by the sight of Pennywise, the evil clown who terrorises the children in IT, the big screen adaptation of Stephen King's horror novel that is curently making a TON of cash at the box office.

But have you seen Pennywise without his makeup on yet? 'Cos you may be pleasantly surprised...

The 27 year old Swedish star (brother of fellow actor Alexander and son of Stellan) has immediately got fans extremely thirsty, even if they are a little concerned by their new found obsession:

bill skarsgard has me confused, I'm scared of him because of it but then I'm deeply madly in love with him pic.twitter.com/NwLhApa8uK

bill skarsgard playes "it" so catch me in that sewer after all pic.twitter.com/4qpBegHtZy

When super sexy can even make a hideous clown even look passable #StillHateClownsThough #pennywise #IT #BillSkarsgard pic.twitter.com/687N9IFEai

The actor who plays Pennywise in the new IT movie is a babe! Hellloooo #BillSkarsgard pic.twitter.com/3tSOKcSTxx

In fact, somewhat worryingly, there are a few people out there who prefer Bill when he's in the clown makeup:

me: hi-
stan twitter: im gonna fuck the IT clown

stephen king: pennywise is meant to scare u

This is the man that plays IT .. y'all know I'm tryin to "float" all the way up to his dick pic.twitter.com/4J2UBrPPuB

Ewww. You guys do know he feasts on the body of scared kids right? Not cool bro.

Bill will be next seen in the Hulu series Castle Rock before starting work on It: Chapter Two which is set for a 2019 release. Hopefully you will all learn to appreciate his regular appearance by then.