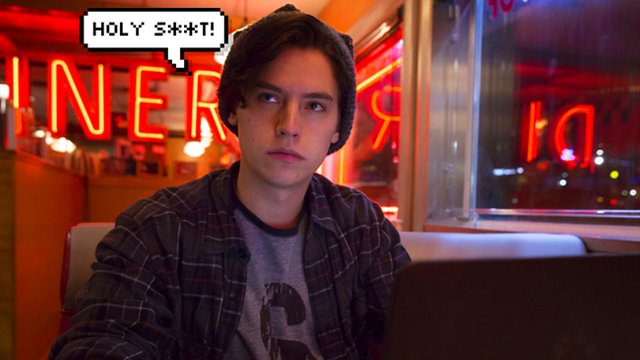 It was right in front of you the whole time.

Riverdale might be on a two week break but that doesn't mean fans are letting up on trying to crack the case of Jason Blossom's murder.

In the hunt to find out what's really going down in Riverdale, one user on reddit discovered something that's definitely passed you by and, more importantly, might provide vital clues about who killed Jason Blossom.

Reddit user jansen52x pointed out how every episode title of Riverdale is in fact the name of a film, or a play on the title of the film. This makes sense given Jughead, the show's narrator, is supposed to be a film buff, so he might name each 'chapter' after his favourite films. But do the plot lines of those films reveal anything more about the plot in Riverdale? Potentially, yes.

One reddit user pointed out that episode 7 is named 'In a Lonely Place'. In that film, released in 1950 staring legendary Hollywood actor Humphrey Bogart, a potentially violent screenwriter is a murder suspect until his neighbour clears him. After that, they start a relationship but his erratic behaviour and violent history cause her to have doubts. In the end, it's revealed that he didn't kill anybody but by this point it's too late to save their relationship.

There are echoes of that in episode 7 of Riverdale. As you will remember, Jughead, who is writing a book about Riverdale, is taken in for questioning by the police. Archie's father, Fred, provides a false alibi for him by saying Jughead was working for him on a construction project during the summer. We still don't know for sure where Jughead was the morning Jason Blossom went missing, although it seems highly unlikely that he was the murderer given there is no clear motive...yet.

According to IMDb, the film follows a group of high school friends who must come to terms with the fact that one of them, Samson, killed another, Jamie. Reactions vary, as Layne is intent on protecting Samson and smuggling him out of the state, while others think it's best to go to the police. No one knows quite how the police will learn about the murder or who will be blamed for it.

Could it be possible that the lead characters (Jughead, Archie, Betty, Cheryl and Veronica) will discover that one of them is the murderer and, instead of going to police, will attempt to keep it a secret? We thought once the murderer was discovered, the natural conclusion would be that they are arrested, the murder plot line will end and the show will move on. If this film is anything to go by, perhaps series two could follow the conspiracy between the main characters to protect the murderer. Now THAT would be something.