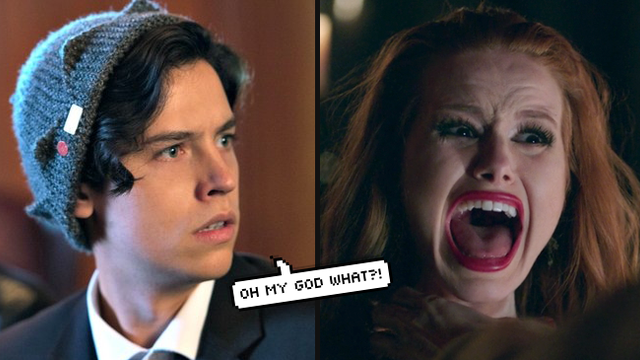 If you've been watching Riverdale, you'll probably be ripping your hair out over the mystery surrounding Jason's death as much as we are. We've written up some theories about the the murder but we still feel like we know absolutely nothing about how this first season will end. After sleuthing a few theories on the internet, we just stumbled across one that could be a MASSIVE game changer for the show.

There's a couple of fan theories floating around Reddit right now that suggest Riverdale will be taking a leaf out of the Archie comic, "Afterlife with Archie" which features Archie battling a Zombie Apocalypse. And the evidence to back it up is absolutely WILD. Let's take a look.

EXHIBIT A: The Riverdale showrunner is also the creator of the 'Afterlife with Archie' comic.

Fans are already speculating that the VERY CLOSE relationship between twins Cheryl and Jason Blossom will take a turn and end up mirroring the exact storyline in the 'Afterlife' comic - implied incest. This particular Riverdale storyline has already been debunked by Madelaine Petsch, who plays Cheryl in the series but you never know...

EXHIBIT B: Sabrina Spellman from Sabrina the Teenage Witch is being introduced in the last episode.

Ok, we had NO idea that Sabrina was an Archie Comics character so now we're shook. Fans are speculating that her introduction will mean that a couple of resurrections are heading our way. In the 'Afterlife' comic, Sabrina attempts to resurrect Jughead's dog and is ultimately sent to the same 'asylum' as Polly. What if she meets Polly and Polly persuades her to 'resurrect' Jason? Zombies. That's what. The undead.

When Cheryl broke down at the Pep Rally and ran off back to the locker rooms, she tells Veronica that "He (Jason) was supposed to come back." Obviously, it's implied in the show that Jason was simply going to 'disappear' for a while, not *die* on purpose. The theory, however, suggests that Jason may have been infected with something and Cheryl was trying to find a cure.

It's also noted that Cheryl took Jason to Sweetwater River, which is where Sabrina lives. Coincidence?

In the fifth episode of the season, Jason DOES in fact come back form the dead - in Cheryl's nightmares. She decides to sleep in his room the night before his funeral service and is almost strangled by a very zombie-looking Jason. Is this just a legit nightmare, or is this a MASSIVE foreshadow? Hmmm...

When Jughead approached one of the boy scouts, he reveals that Dilton Doiley was out in the woods teaching his scouts to shoot so that they can protect themselves because no one else will. He says it as if there was about to be something they needed to protect themselves from. A zombie, perhaps? This particular theory also notes that Dilton is one of the first people in the Afterlife comic to identify the animated corpses as zombies.

The last point that really makes you wonder is why Jughead is the one narrating. Now, we know that Jughead is writing a book about the town and the murder of Jason Blossom. But what if he's writing it (and narrating the show) because he's the last one to die? Maybe he's retelling the story in the aftermath of the zombie happenings and eventual deaths? Oh god, our heads hurt.

Can you see Riverdale heading towards a full on zombie fest? Or do you just wanna forget about all of that and look at shirtless gifs of Archie all day? (We're voting for the latter.)