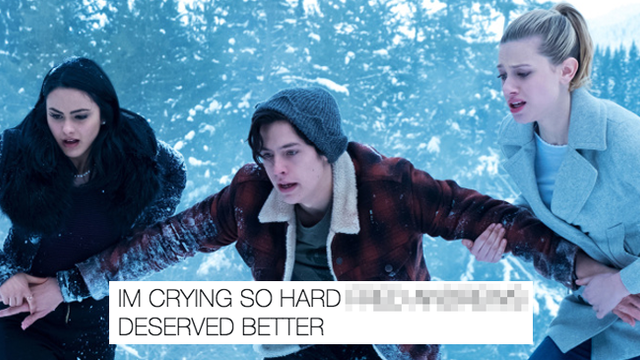 "IF THEY DIE, I AM UNSTANNING!"

After 13 episodes of pure torture (too soon, Jason?) Riverdale has finally concluded with an explosive finale. And we mean that in the most literal way possible. The cast were not lying when they said you would need to lie down after watching this episode. It did leave us with more annoying questions than answers but it was LIT none the less.

But we need to talk about what happened right at the end and what will quite probably be the launch point for the second season's mystery.

Once again, we have to warn you, there are ~SPOILERS~ below this gif of Archie. Very big spoilers. Ones that you don't wanna read unless you've watched the last episode. So if you're ready, scroll on down for the big reveal.

THIS IS YOUR FINAL SPOILER WARNING!

As the episode draws to a close, we see Archie head to Pop's to meet his dad for some breakfast. He heads off to wash his hands and while he's doing so, there's a commotion going on in the dining hall. Archie heads outside to investigate and he finds Pop being held at gunpoint by a robber. Fred gets up to try and help but just as he steps up, the robber goes to shoot him, sees Archie lunge towards Fred and the robber pulls the trigger.

But it's not Archie that takes the bullet. It's Fred who threw himself in front of Archie. And the last scene of the episode is Fred lying in a pool of blood with his head in Archie's lap - and no one knows if he makes it out alive.

Everyone is absolutely FUMING about the traumatic cliffhanger.

If Fred Andrews dies, I'm going to cry my heart out for days. He was the only good parent left. #riverdalefinale

me: fred andrews is the only normal and innocent character in #Riverdale he's the best

:: Fred Andrews is the only decent parent in Riverdale so he better survive. #Riverdale ::

Let',s put the ships aside they will always be there now Fred Andrews on the other hand, HE BETTER NOT BE DEAD SO HELP ME GOD. #Riverdale

There's already tons of theories about who's responsible.

100% Fred Andrews, hurting for cash, was running drugs for Blossom, was about to fess up to Arch, and well, you saw how it ended #Riverdale

If Fred Andrews dies, the Lodges get what they want.. obviously Hiram or Hermoine hired the shooter #riverdalefinale

I guess "Who shot Fred Andrews?" is next season's storyline. I guess it has to do with Hiram. Gotta put friction on Arch/Ron ship #Riverdale

im calling it, hiram lodge sent someone after fred Andrews but told them to make it look like a robbery #riverdalefinale #Riverdale

All we know is... out of all the parents on Riverdale, Fred Andrews was the one that deserved better.

We guess the shooting, or please don't make us say it... murder... of Fred Andrews will be the premise of the second season along with that massive baby bombshell that was revealed in the Cooper household. We're already sweating about it.