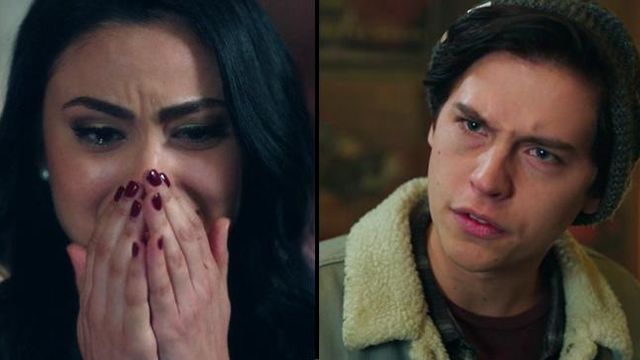 NOW we're in trouble. [SPOILERS AHEAD]

You know what, Riverdale season two is not holding back at all. After the bombshell of Miss Grundy's grizzly murder last week, we've been sleuthing, forming conspiracies, crying ourselves to sleep and screaming into the void about all the new things we learned in the premiere episode.

Episode two was no different: Hiram and Hermione Lodge aren't to be trusted (but we kind of already knew that), Jughead has probably got himself into some sort of sordid situation with a corrupt serpent lawyer, Betty is constantly doing the MOST, New Reggie is dangerous but also incredibly hot, Alice Cooper is officially the only person in this town who gets stuff done and... Archie now has a gun.

Thanks to Sheriff Keller's incompetence, the gunman is still on the loose and he's still reeking havoc on the town. At the end of the episode, we find Midge (who looks so much like Carly Rae Jepsen in that wig, we had to do a double take) and Moose in a car in the woods knocking back sherbert straws of Riverdale's drug of choice 'Jingle Jangle', which is still the most ridiculous name for a drug we have EVER heard.

Anyway, they start to hear a rustling in the trees and out pops the killer, gun in hand, mask on face. He walks up to the window of the car and... well, we guess that's the last we'll be seeing of Midge and Moose!

Absolutely EVERYBODY lost their minds over the latest murders, mainly because Midge has 0.3 seconds of screentime before she was shipped off to Riverdale heaven.

#Riverdale they rlly did Moose and Midge like that pic.twitter.com/5K8TPON7cY

THEY KILLED MOOSE AND MIDGE?!?! #Riverdale

Honestly, justice for Midge. They did her the dirtiest.

Some people are still holding out hope for the pair but judging by those blood splatters and amount of shots fired, they probably as dead as you can get. Now we know that the killer isn't just targeting Archie's nearest and dearest, who the bloody hell could it be?