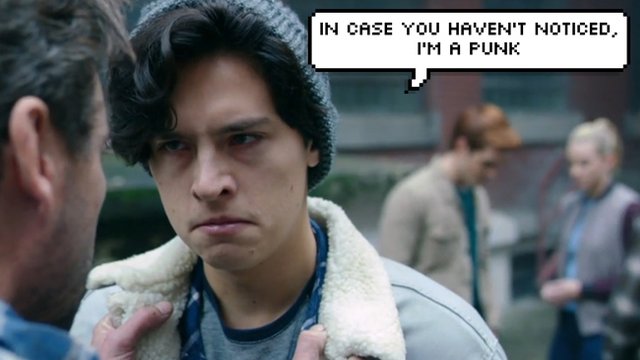 As the first season of Riverdale comes to a close, rumours and fan theories are flying around the internet about the fate of the characters and the potential storylines for the next season of the show. After the shocking revelation that it was Clifford Blossom who killed Jason (his own damn son!), it feels like almost anything is possible in the once calm and sedate town of Riverdale.

One of the most popular theories so far is that Riverdale will be merging with Sabrina (aka the witch) and the town of Greendale across the river. In fact, some believe that Betty's mum, Alice Cooper, could in fact be a witch and a zombie invasion in about to happen. But the latest theory running around reddit will leave you even more shooketh.

Well, kinda. One reddit user has been searching the archives of the original Archie comics and discovered this cartoon strip of Jughead when he went through his punk phase and called himself 'Captain Trash'. 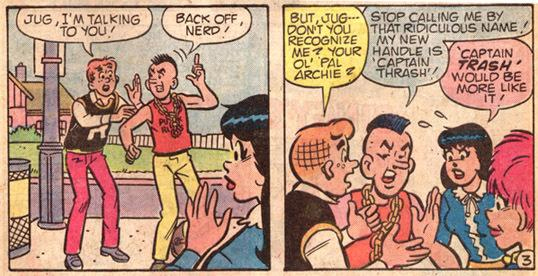 The strip is allegedly from 1983, which is some time after the initial explosion in punk music in the mid-70s but, hey, that hasn't stopped almost every teenager since the 70s trying out a punk lqqk. From what we could find, it looks like Jughead goes punk for a couple of days and turns in to a bit of a dick before finally giving up punk for good. Archie was said to be very disturb by the whole experience.

We're obsessed with his new name too. Jughead, as you probably know, has a particularly fervent fandom on Tumblr, which also happens to be the home of many teens who like to refer to themselves as trash. It's feels like destiny that Jughead would be adopted by the trashiest corner of the internet. True trash always finds one another in the end.

So, could this mean that Jughead will be going punk in season 2? Part of us would love nothing more than to see Cole Sprouse rocking a mohawk and a Minor Threat t-shirt, if only for the lolz. Although we're not sure anything will ever beat this moment in Riverdale history...