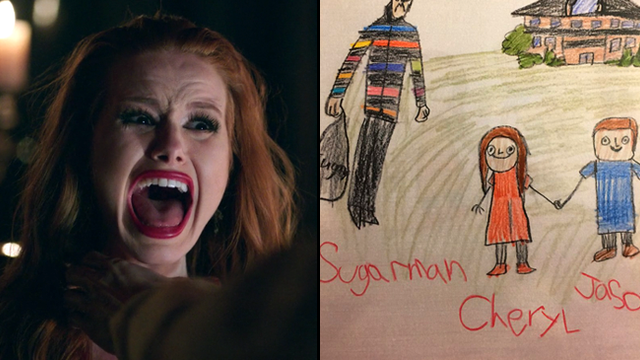 “Lock your doors #Riverdale... the Sugar Man is coming...”

Looks like Betty Cooper was right. "Something wicked this way comes" to Riverdale... Show-runner Roberto Aguirre-Sacasa has been sharing brand new images from season two again and we're freaking out.

His latest offering? This hand drawn picture of Cheryl and Jason Blossom with the caption: “Lock your doors #Riverdale... the Sugar Man is coming...”

Lock your doors, #Riverdale, the Sugar Man is coming… pic.twitter.com/WkPSHQnt6N

So, who exactly is the 'Sugarman'? There's two different theories currently floating around about who he could possibly be and both of them sound bloody terrifying.

According to i09, the 'Sugarman' is a monster that already exists on the internet and he sounds F*CKING terrifying. Apparently, the Sugarman, a distant relative of Reddit's favourite villain Slenderman, is a murderous creature who sneaks into people's houses to find candy. If he can't find any candy, he then eats the children.

The image itself also looks like something that could have been drawn by lil' baby Cheryl or Jason (because why would anyone else be drawing the Blossom twins outside of their own house? Let's get real...)

Could the Sugarman be a mysterious drug dealer that regularly visited Thornhill? No matter how hard Clifford Blossom tried to hide his dealings from Cheryl and Jason, they could have picked up on it and once Clifford (or Penelope) realised they knew about it, they started referring to him as the 'Sugarman' as a cover for all those drugs.

Certainly checks out when you consider the Blossoms run a MAPLE SYRUP business. We mean, who would POSSIBLY suspect a man with bags of 'sugar' showing up on the Blossom's doorstep. And, even more scandalous than that, what if he's the drug dealer who FP warns Jughead about in that deleted scene? *is shook*

Guess we'll find out when the second season drops in October...