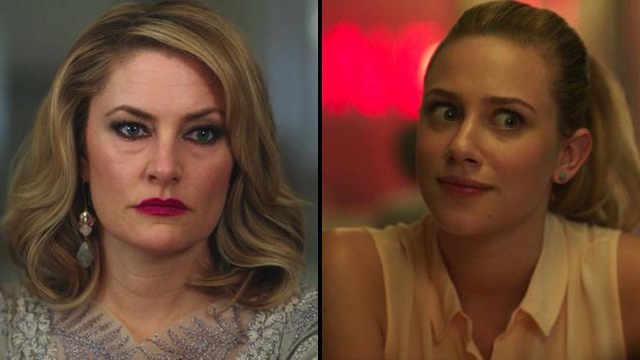 Could Alice Cooper actually be related to Sabrina the Teenage Witch?

FACT: Alice Cooper is the best character on Riverdale. Better than Jughead. Better than Cheryl. Better than EVERYONE. She's got a sharp tongue, she knows how to put an amateur sleuth in their place and she's hilarious. But there's seems to be a LOT of dark and mysterious secrets lurking behind that squeaky clean Cooper facade...

We KNOW that Alice hails from the Southside - something she threatens FP to keep quiet about - but is that where she's ~originally~ from? There's a few theories online that suggest all is not what it seems with Betty's mother. In fact, everyone seems to think she may be linked to Sabrina and the town of Greendale across the river. In other words, everyone thinks she's a witch and there's a LOT of evidence to support it. Let's dive in.

1) There have been various off-hand occult references and phrases littered throughout... and the majority of them seem to come from Alice.

There have been plenty of references to witches and pagan practices across the first season. "Madame Satan", "crazy witch hunt", "sacrifice to some dark pagan god", "hellishly simple", etc. Even Cheryl's grandmother was all up in her crystal readings and what not. The illusions to the occult are heavily tied in with the Blossom family but what if that's just a red herring and Alice is the low-key real witch in town?

In fact, here's a few visual Cooper receipts for you, courtesy of Tumblr. Brewing? Sage? Articles on the Riverdale Register about "Witch Hunts"? Interesting...

2) It has been stated that "crazy" runs in the Cooper family.

It's entirely possible that when Betty points out that "crazy runs in the family" that "crazy" might mean something else...

As this theory points out, in "The Chilling Adventures of Sabrina", at the age of sixteen witches are able to choose between being baptised during a satanic ritual or skipping it and living life as a mortal. What if Alice skipped the ritual and decided to live as a mortal? Or, what if she took the ritual, kept her powers at hidden but decided to raise her children as mortals?

The "darkness" that runs in their family could be the trigger for Betty's dark episodes. She is approaching the age of sixteen after all. But if Alice had an active hand in keeping both Betty and Polly's potential "witchy heritage" at bay, then what happened to her secret son?

3) What is Alice Cooper "capable" of?

Look at her stirring that cup of tea like a cauldron... Anyway, now we know that Alice had absolutely no hand in the murder of Jason Blossom, what the F*CK was she talking about when she threatened her husband, Hal? If Alice did have witches blood running through her, could she have been alluding to her "magical powers"?

There's been a theory going around that suggests that Sabrina is the granddaughter of Alice Cooper via Polly but that's fairly unlikely unless they're planning to set the new Sabrina TV series years in the future.

But Sabrina and her aunts DO have blonde hair. Alice and her daughters all have blonde hair too. And as we know in Riverdale, your hair colour is pretty indicative of your family name. It's basically the number one rule of Riverdale. And if Alice's maiden name turns out to be Spellman in the Riverdale universe, I will flip a god damn table.

P.S. Mädchen Amick once played a witch on Witches Of East End and you KNOW how much Riverdale loves a subtle pop-culture reference… just sayin’.

What do you think? Do we have a new Supreme in the form of Alice Cooper? Or nah?