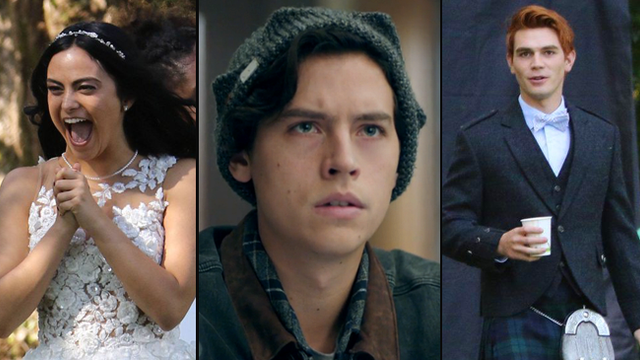 Filming has begun on the first three episodes of the second season on location in Vancouver and pictures have been surfacing across the internet of the cast hard at work. First there was a snap of the cast's table read without Luke Perry (Fred Andrews), then Luke was spotted in the background of a behind the scenes pic and now there's some solid gold evidence that Fred is potentially back in business (for now...)

Yesterday (June 26), a few eagle-eyed sleuths in the area spotted the cast shooting a wedding scene in a park and it looks like Archie and Veronica will be "tying the knot" in what is probably going to be a pretty terrifying dream sequence.

Camila Mendes aka Veronica was spotted wearing a gorgeous wedding dress. Betty, Josie and Cheryl all seem to be appearing as her bridesmaids.

Veronica and Archie are getting married! Safe to assume this is probably a dream sequence.
#Riverdale #ChoiceDramaTVShow pic.twitter.com/nm0RU4n06r

The groom, Archie will be wearing a kilt, along with the rest of the boys. (Is Archie Scottish then? Cool.)

Jason is back from the dead again.

How weird was today's #Riverdale wedding? Dead Jason Blossom/Trevor Stines there in white. And the actor gave Mom Blossom a hug. pic.twitter.com/v2O7O8qTTr

Oh... and the gunman who shot Fred. *sweats*

The mysterious gunman has a face! Anyone know who this actor is?
#RiverdaleStrong #RiverdaleSeason2 #Riverdale pic.twitter.com/DxEtgw30yP

Obviously, this has got to be some sort of dream sequence, right? Seeing as Jason is alive and well and back in his all white get-up and the fact that there's an ominous appearance of the guy who shot Fred. But whose dreams are they? Is Archie suffering from a bit of PTSD after his dad's shooting? Or is Fred having post-traumatic nightmares on his recovery bed?

Low-key hoping for the latter to be honest, but let's face it... it's probably Archie's nightmare. #SaveFredAndrews