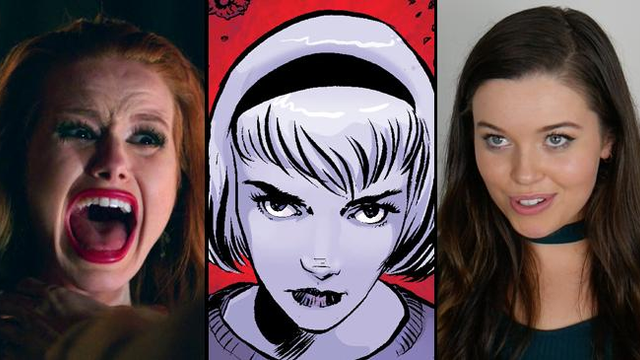 Sabrina sounds like a witch we really wouldn't get on the wrong side of!

The second it was announced that Sabrina the Teenage Witch could FINALLY be returning to our screens with a spooky twist, we couldn’t help but wonder (calm down, Carrie Bradshaw) who would end up playing her and just how sinister and scary the creators of Riverdale would make her character.

The show itself will be based on the comic book, The Chilling Adventures of Sabrina, as opposed to the iconic Melissa Joan Hart 90’s classic we all know and love.

Last week, show runner Roberto Aguirre-Sacasa announced that casting for the role had officially kicked off and even came through with a picture of the script that the auditioning actors would be reading from - which just so happened to be the opening scene of the show.

Perfect project for October as the #Riverdale family expands… And 9 days to premiere night… pic.twitter.com/Kprlxjiz5H

Over the past few days, audition tapes from the sessions have been finding their way online of young actresses reading the sinister opening scene (no sign of fan-favourite Dove Cameron just yet) and while, the show sounds bloody terrifying, Sabrina seems like the sassy witch we can really get on board with.

Omega Underground managed to clock one of the auditions from Australian actress Maggie McKenna and to be honest, it looks really good! Other actresses currently auditioning for the role of Sabrina include Charlie Torr, Ariel Kaplan, Bekka Walker and Adelina Hudson.

In the first half of the scene (the part we saw in RAS’s sneak peak), Sabrina is showing Harvey where she was born and where she’ll be reborn at the weekend. The second half of the scene details Sabrina meeting three rival witches, then proceeds to scalp them with details of her heritage and blood line. The whole thing sounds amazing, to be honest!

Sabrina is scheduled to air at some point in 2018, whether she pops up in Riverdale before then? We’ll just have to wait and see!