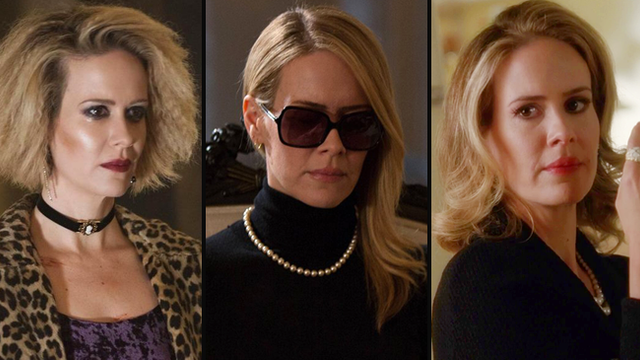 Hang on... was this just a massive hint?

New American Horror Story news incoming! The cast of AHS: Roanoke took to the stage at PaleyFest yesterday (March 26) to discuss the most traumatic television event of the last year and their *potential* involvement in the next instalment of Ryan Murphy's never-ending nightmare.

Just as it was last year, the cast were pretty tight lipped on what they knew or could reveal about the upcoming "Election" season of AHS - it seems they're just as clueless on the subject as everyone else. But the panel did reveal a few bits of juicy info regarding the future of the series... and the biggest one was courtesy of Queen Sarah Paulson.

As we all know, Sarah Paulson played three characters in AHS: Roanoke. There was fake Shelby who loved yoga, Audrey who had a terrible English accent and everyone's favourite unlucky journalist from the 60's, Lana Winters. Her reprisal of Lana Banana meant that it was the second character she brought back from a previous season - Billie Dean Howard made an appearance in Hotel if you can cast your minds back to early 2016.

During the panel, Queen Paulson was asked which other character from her AHS back catalogue she would like to bring back and we can't help but think that her answer was some kind of hint at what's to come in the future of AHS.

Her answer? The Supreme, of course.

“Probably Cordelia. We only got to see her just getting her powers. I just would like to know if the power might have been something that kind of changed her. Maybe we’ll get to see that.”

Maybe we will... considering that there's a freakin' Murder House/Coven crossover season happening in within the next few seasons. So unless someone has tried to sabotage and murder The Supreme since the last time we saw her, it looks like we actually WILL be getting that season of American Horror Story starring Sarah Paulson in all 8 leading roles.