Sarah Paulson Is Playing A Lesbian On "AHS: Cult" And Fans Are Losing Their Sh*t 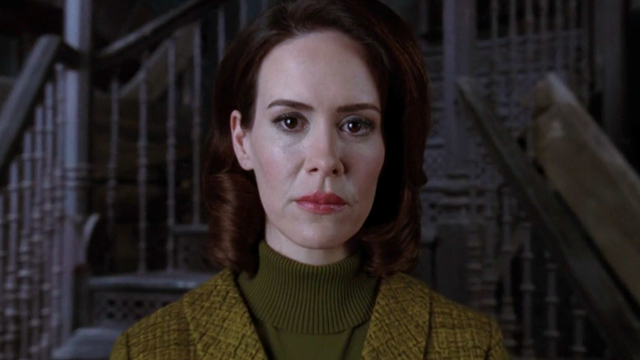 Another iconic Paulson character is coming.

As you can expect, very few major deets about the season were revealed during the panel but where there's a Sarah Paulson, there's always a tiny little spoiler to two.

So, what did we learn from the panel about the new season? Well, Cult's tone will be returning to the familiar "campy" tone of Coven and Hotel. There's also going to be a brand new haunted house and in that haunted house live two women who are married to each other. They run a restaurant called "The Butchery on Main" and also have a child.

When Sarah let slip that there would be a married couple on the show, she followed up by saying “It’s me and Alison [Pill],” then quickly added “that may or may not be true.” But thanks to a slip-up on the billing for the panel, we now know that Sarah's character's full name is Ally Richards-Mayfair and has the same surname as Alison Pill's character.

People are now absolutely losing their SH*T over the reveal because Sarah, a lesbian herself, hasn't actually played a lesbian character since she portrayed Lana Winters in Asylum (and again in Roanoke if you wanna play like that.)

person: hi how are y-
me: SARAH PAULSON IS GONNA PLAY A FUCKING LESBIAN IN AHS SEASON 7 pic.twitter.com/lS64idpYXV

"sarah paulson will play a lesbian"
me pic.twitter.com/FdQx3qIHum

sarah paulson is not playing a hetero this season. it's a good night. goodnight.

SARAH PAULSON IS PLAYING A LESBIAN AND A MOM IM YELLING

There is of course the veerrrryy small detail that Ryan Murphy let slip regarding the "love story for the ages" between Sarah's character Ally and Evan Peters' character Kai that might throw a spanner in the works of Ally and Ivy's marriage but it wouldn't be American Horror Story without a bit of scandal, would it?