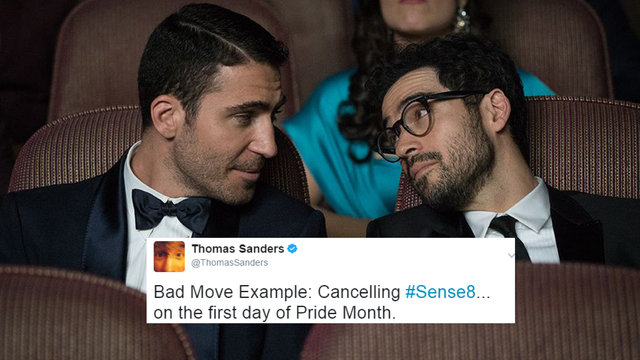 "Sense8 is a show with one of the best lgbtq+ representation out there. It deserved a season 3"

Something curious is happening at Netflix. The nearly ubiquitous streaming entity has begun cancelling some of its most artistically groundbreaking original programming, despite being known for hardly cancelling anything and taking huge creative risks. It was announced last week that The Get Down was getting the axe. Now, fans are reacting to the news that Sense8 will not be returning for a third season on Netflix.

It was Heroes-esque in how it connected characters from across the globe, but went even further by putting diverse characters front and center of an intense fantasy landscape.

Understandably, the internet is frustrated by Netflix's decision.

I KEPT TELLING Y'ALL TO WATCH SENSE8 BUT YOU WASTED YOUR TIME WITH 13RW AND RIVERDALE AND NOW IT'S CANCELLED!!! #RENEWSENSE8 RIGHT NOW!!!!! pic.twitter.com/4pAnYsOc1Y

sense8 is a show with one of the best lgbtq+ representation out there. it deserved a season 3. #BringbackSense8 #pride2017 pic.twitter.com/7Nu2uyOM43 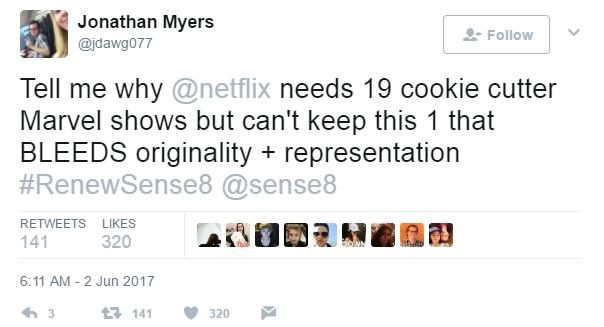 Last year, it was revealed that Netflix's The Crown was the most expensive show ever made at a staggering 13 million per episode. With all due respect to Lizzie II, there are enough films and shows about the royal family. There are enough Marvel shows with Rosario Dawson as the plucky nurse. There are enough seasons of Netflix's Arrested Development (it's bad now, sorry).

Sense8, though wildly unrealistic, was creative, energetic, and original. It went through painstaking lengths to be inclusive, to show what different people on planet earth look like, and to reflect LGBTQ+ relationships on its huge platform.

Bad Move Example: Cancelling #Sense8... on the first day of Pride Month. I would very much like this show renewed, please & thank you.

During the month of June, as we celebrate the artistic and cultural contributions of the LGBTQ+ community, it's incredibly disheartening to say goodbye to a show with two trans creators that intentionally included gay, bi, and trans characters and actors.

Fans have launched a petition to save Sense8 and there's no reason to think Netflix bosses can't have a change of heart. But, if we're to believe the talk coming from higher ups at the streaming platform, more shows could go before year's end.