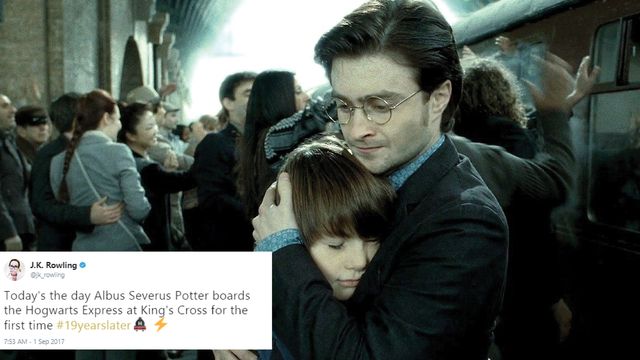 Today is a very important day in the Harry Potter universe. Fans of the beloved books and film series are celebrating September 1, 2017 with the hashtag #19yearslater.

J.K. Rowling shared a message reminding her 12 million Twitter followers why today was so special.

In the epilogue of Harry Potter and The Deathly Hallows, we learn that Harry, Hermione, Ron, and Ginny have all gathered at King's Cross station to send their kids off to school on the Hogwarts express.

The epilogue is titled '19 Years Later' (meaning 19 years after the defeat of Voldemort in 1998).

September 1, 2017 is the day Harry sends his son, Albus Severus Potter, to Hogwarts for the first time. Real life has finally caught up with the books and it's a bittersweet day for Harry Potter fans everywhere.

today, on september 1st 2017, harry and lily sent albus off to hogwarts for his first year.
all was well.#19yearslater pic.twitter.com/WDdupWqdZ3

Today is the very day that the final chapter of The Deathly Hallows begins. #19yearslater
Good Luck at Hogwarts Albus Severus Potter! #Sep1

Some fans even headed to King's Cross station in London to celebrate the momentous day.

Gryffindor, Hufflepuff and Slytherin are ready to go #BacktoHogwarts! pic.twitter.com/1fMCxk2RQV

In the midst of all the '19 Years Later' feels, J.K. Rowling didn't forget to show some love to the stage production, Harry Potter and The Cursed Child, which picks up right where the epilogue left us.

Hmm. It *is* strange to think that Albus has been boarding the train for a whole year in the West End, but that's magic for you #CursedChild https://t.co/b1UYNmBzSx