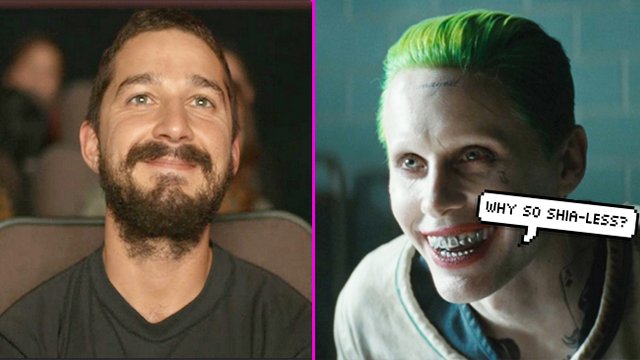 The intense actor was very nearly cast in a key role in the supervillain franchise...

Suicide Squad, the much discussed super villain epic with the good soundtrack, almost looked very different as an original casting choice has been revealed.

Actor, performance artist and living meme Shia LaBeouf has told Variety that he nearly played the role of Lieutenant GQ Edwards, the part that eventually went to Scott Eastwood.

Shia had been working with Squad director David Ayer on the 2014 film Fury and was initially offered the part...before the studio got involved.

The character was different initially. Then Will [Smith] came in, and the script changed a bit. That character and Tom [Hardy’s] character [later played by Joel Kinnaman] got written down to build Will up...I don’t think Warner Bros. wanted me. I went in to meet, and they were like, ‘Nah, you’re crazy. You’re a good actor, but not this one.’ It was a big investment for them.

Shia in the role would certainly have made for an interesting choice. Would he have gone full method actor and actually joined the army? Would he have prepared for the role by conducting some kind of art experiment in an elevator? Tragically, we'll never know.

Let's be honest though - Shia is way more suited to The Joker anyway.