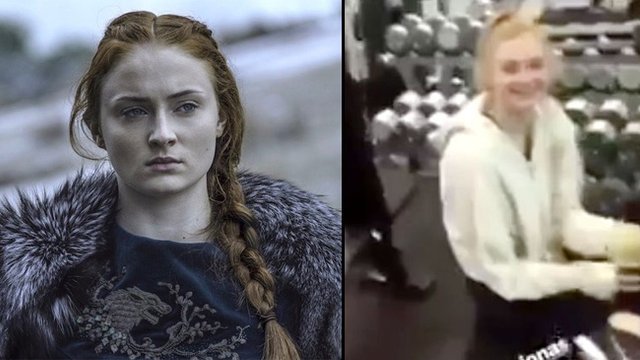 A clip of the 'Game Of Thrones' actress in the gym went viral after some viewers claimed she could be heard using the 'n' word.

Game Of Thrones actress Sophie Turner has been forced to deny using a racial slur in a recent work out video posted on Instagram.

The clip shows Sophie hanging out at the gym with boyfriend Joe Jonas and DJ Brendan Fallis but many viewers have suggested that Sophie can be heard using the phrase "what's up my n*****".

Sophie Turner cancelled. Joe Jonas cancelled. That other Caucasian who was laughing cancelled. I SAID WHAT I SAID pic.twitter.com/xa6h4AyncW

Sophie Turner: Cracker is an offensive word, please dont use it
Also Sophie Turner: WhAtS uP mY nIgGgGgGa pic.twitter.com/XGAsvHfyUZ

The video was quickly deleted from Fallis' Instagram story but was copied and widely shared on social media, forcing Turner to issue a strong denial in a statement to E! News:

"I used the word 'motherf**kers' in a recent video posted in an Instagram story and not a hateful racial slur that has been suggested. I am incredibly upset that anyone would think otherwise, and I want to make it clear that I would never use such an abhorrent word."

So, which phrase was Sophie really using?

Well, upon watching the video, although the audio is slightly muffled, it definitely sounds like 'motherf**kers' to us. But what do you think?

If you listen to this slow motion video of Sophie Turner and still think she said the N word, I can't help you. pic.twitter.com/eZT04S5D46