Your world is about to be turned ~UPSIDE-DOWN~

Milly Bobby Brown, Gaten Matarazzo and Caleb McLaughlin (also known as Eleven, Dustin and Lucas from the best show in existence "Stranger Things") descended on to the Emmy's red carpet on Sunday (Sept 18.) and left *everyone* SHOOK in their wake. If you hadn't already requested adoption papers, we can guarantee you will after seeing what they got up to!

First of all, they were the best damn people on the red carpet. Slaying every interview and serving FACE in the slo-mo GlamBot!

Strange, it's like they've done this before. The cast of Stranger Things OWNS the E! Glambot. #Emmys pic.twitter.com/T8iS8leUFT

Even the TV world veterans were obsessed, like Modern Family's Ariel Winter.

Once they were inside, they turned up their adorable charm and did a little pre-show sing song for their adoring fans in the front rows. Can you believe they originally wrote and performed 'Uptown Funk'? ICONS.

We could watch this all damn day.

LOOK AT THAT ELECTRIC SLIDE MY GOD

As if that wasn't enough to make you scream with sheer happiness, later in the show, they dressed up as their "Stranger Things" characters and started handing out sandwiches to all the paupers in the seats. ON BIKES.

Here's to seeing all three of these legends (and Mike!) accepting their own Emmy's and being served sandwiches in their seats by Sarah Paulson at next year's show. 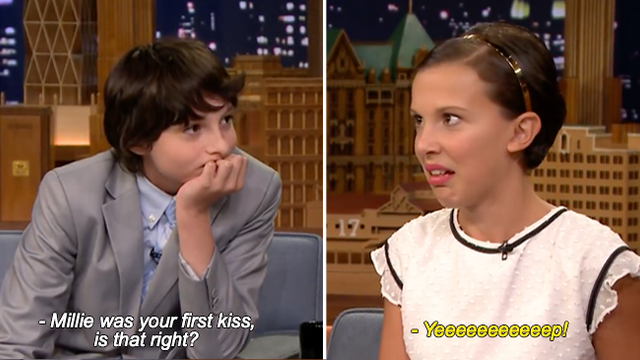