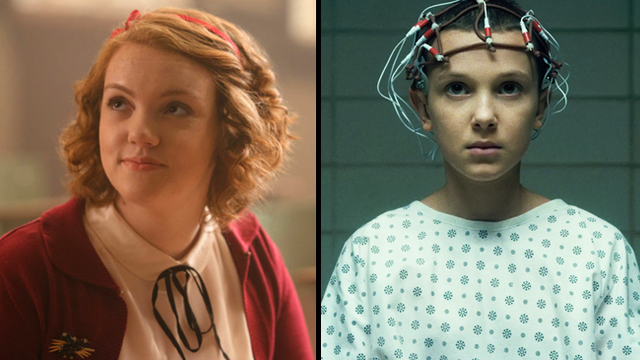 Serving up some long awaited #justice.

It's ok, you can admit it. We know you've been neglecting your real life responsibilities to binge watch Riverdale. We've been doing the same too. In fact, four episodes in and we're already obsessed with it. But we bet you're not as clued up on the murder theories as we are, and we also bet you missed the sneaky little Stranger Things reference that wormed its way into the third episode of the brand new teen drama...

In episode 3, Betty and Veronica join forces with frenemy Cheryl and low-key babe Ethel Muggs who helps take down the school's trashy football team after it was discovered that they've been sleeping with all the girls and ranking them. Absolute rats.

Of course, in Riverdale, Ethel is played by Shannon Purser who also (how could we ever forget) is the very same actress that brought Barb to life on screen in Stranger Things.

Toward the end of the episode, the girls unite after the ranked list is published in the school newspaper, shaming the entire football team and getting them suspended thanks to Ethel's on the record retelling of her experience with Chuck. After saying thank you to Betty and Veronica, Cheryl turns around and say "Hashtag Justice For Ethel." *SIRENS!*

In case you didn't catch it, the comment was a cheeky little nod to Pursers' other iconic character, the fallen hero Barb who, after her untimely and unjust death at the hands of the Demogorgon, has sparked a MASSIVE #JusticeForBarb movement amongst Stranger Things fans.

Of course, everyone freaked out.

THEY JUST SAID "hashtag justice for ethel" ON RIVERDALE IM

hashtag justice for ethel lmao they did that

"She has a pool" "hashtag justice for Ethel" pic.twitter.com/WyGODLx0KW

It's nice to know that the people of Riverdale are more enthusiastic about seeking justice for Shannon Purser's poor ol' characters than the people of Hawkins, Indiana, innit.