WTF? This Girl Got Homophobic Abuse On A Plane For Watching A "Supergirl" Episode 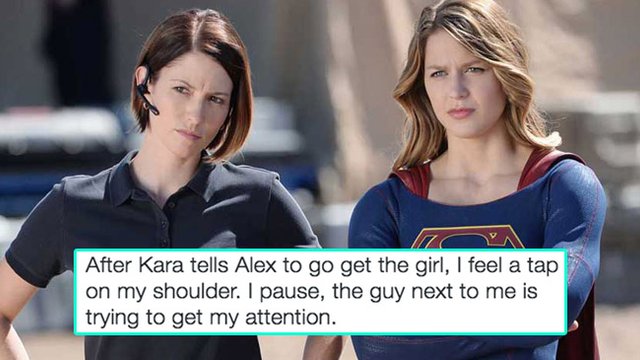 An aspiring screenwriter shares her story of abuse on a flight as she enjoyed her fave TV show...

A Supergirl fan had the story of her horribly eventful and dramatic flight go viral yesterday (January 5th) after she posted the details on Twitter.

The DC show has gained a lot of press attention lately for its portrayal of same-sex relationships through the coming out of the lesbian character Alex.

But sadly, not everyone can accept what a positive move this storyline has been...

Dened Rey, an American self-described "TV lover" was watching a key episode on a flight to Vancouver when she was accosted by the man next to her who threw homophobic slurs at her, much to the shock of her fellow passengers.

So, yesterday on my flight to Vancouver I was watching Supergirl, more specifically, the episode where Alex comes out to Kara.

After Kara tells Alex to go get the girl, I feel a tap on my shoulder. I pause, the guy next to me is trying to get my attention.

Guy tells me I'm being inconsiderate & disrespectful because there are kids on that flight. I shouldn't expose them to the "gay abomination"

I point out that the audio is off, but even so, there's nothing wrong with kids being exposed to queer characters, queer heroes, on TV.

He gets upset, calls me "one of them disgusting dykes" and "a fucking n*****". Then tells the flight attendant he must switch seats ASAP.

Guy outright tells the FA that he absolutely can't stand sitting next to someone as filthy as me. Ofc, I'm livid, so are those around me.

Dened was, of course, bombarded with messages of support from friends and strangers alike, horrified by the man's small mindedness and general bigotry.

But, the story took a very positive turn once the flight attendant got further involved...

FA says she'll solve the problem and leaves, then she comes back and tells me I've been upgraded to 1st class, free of charge.

Guy is outraged, FA claps back, "You wanted her gone, so she is. Stop disrupting the flight or you'll have the police waiting upon landing."

Amazing work by the FA - somebody promote that woman immediately!

But things get even better as Dened moves into the First Class seating area...

I get to 1st class, I'm still livid, so I take my laptop out and keep watching Supergirl because I can, I love the show and fuck homophobia.

After Alex & Maggie kiss, I notice the woman next to me staring at my screen so I brace to have yet another argument. Thankfully, I'm wrong.

Cause her BFF of 35 years came out to her as a lesbian and at first, she just wouldn't accept it. It went against her beliefs. It was wrong.

She told me she saw her best friend's struggles reflected in Alex. That Alex allowed her to understand what her friend was going through.

And basically thanks to Supergirl she got past her own prejudice and wrongful belief and now their friendship is stronger than ever.

She also told me she joined a group for parents of LGBTQ kids cause she wants to be ready and supportive when her daughter comes out to her.

I'm happy to know that shows like Supergirl are out there, helping people be more compassionate & better informed about the LGBT community.

What are the odds of being sat next to someone like this straight after such a horrible incident? This gives us some hope for humanity!

Dened concludes her story by thanking the makers of Supergirl for providing valuable representation for LGBTQ characters in a major TV show and plans to pursue her career as a screenwriter.

Basically, the moral of the story is that you should never mess with a superhero!