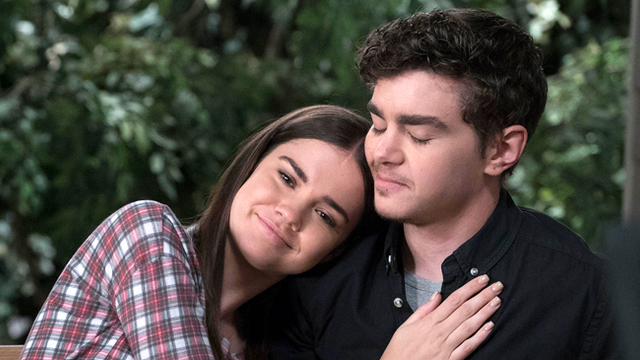 The Fosters just made TV history.

While there's been a few transgender characters finally popping up on TV over the past few years and alongside them a few romantic relationships, there's never really been a solid, realistic portrayal of a ~love scene~ between one (or two) transgendered people depicted on screen, has there? Well, now there HAS.

The Fosters just did it's bit to end that by not only portraying a realistic love scene for a transgender character, but by making it one of the YOUNGEST example to do so involving transgender AND cisgender characters. The storyline has now broken new ground for LGBTQ+ youth representation on screen.

Callie is a cis-gendered female and Aaron is a trans male. Their pair have been a couple for almost one and a half seasons. Last week, they finally decided they were ready to take it to the next level.

Elliot Fletcher, the actor who plays Aaron (who is also trans himself), spoke to TV Guide about the importance of the scene and the relationship between the two characters.

"I hope that people watching this show can see how it's not only normal, but how loving and sweet and romantic it can be. In a lot of ways trans people are fetishized or thought of in a weird sexual deviant kind of way. That's kind of weird and not the case. This episode does [a really good job] of showing just how normal and loving this relationship is and it doesn't matter that Callie is cisgender and Aaron is transgender."

The Fosters has been breaking ground since it first aired for so many reasons; back in 2015, they aired the youngest same-sex kiss between characters Jude and Connor (the characters were 13 years old at the time.)

Here's to more visibility of realistic young LGBTQ+ relationships and teen sexuality on TV in the future!