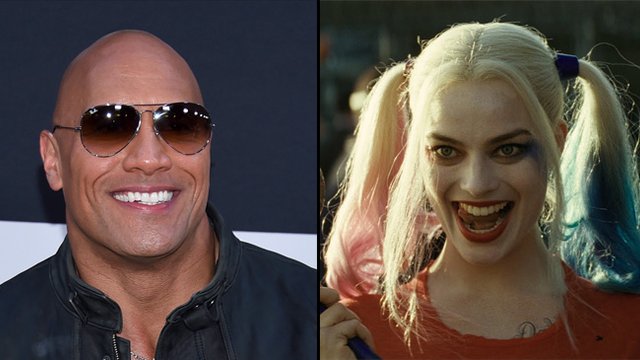 With Dwayne Johnson on board, could the DC superhero franchise be saved from box office oblivion?

Fans of the superhero movie/Hot Topic fever dream Suicide Squad have been waiting with baited breath for any details about it's upcoming sequel, due to start filming next year.

And while Will Smith, Margot Robbie and Jared Leto (probably) will all be back in action, The Wrap is now reporting that another major A-list figure may also be along for the ride...

Yep - The Rock is in the building!

Dwayne Johnson is said to be in advanced talks to play the role of Black Adam, the enemy of DC superhero Shazam. Johnson has been hinting about his invovement for a while, having been attached to the part since 2008 but with no official project ever greenlit. A cameo in Suicide Squad 2 may be the perfect launch pad for the character.

But beyond the obvious benefits to DC and Warner Bros of expanding their cinematic universe, we should not underestimate the equal benefit of bringing Dwayne in to revive interest in the world of Suicide Squad which, let's be honest, didn't exactly live up to expectations.

Despite a truly killer soundtrack, on point aesthetics and a star-studded cast, the movie ended up a bit of a mess thanks to a truly convoluted plotline and an, ahem, somewhat exaggerated Joker performance from Leto.

However, there were still elements to admire and years of comic book plotlines to devour for future installments that gives us superhero fans hope that things could be salvaged in time for the sequel. They just need that little extra piece of charisma to push them over the edge...

As Dwayne himself once sang in an SNL monologue, he is "franchise viagra", blessed with the incredible ability to bring a movie series back from the edge of oblivion with a single raised eyebrow and a witty one-liner. Would you still be watching the Fast & Furious movies without Luke Hobbs leading the pack as he bickers with Jason Statham while they break out of prison? Would you be remotely interested in the upcoming Jumanji remake if it wasn't for Dwayne shooting knowing side-eye at any camera that catches him in the light? Of course you wouldn't.

It is a testament to the talent of the man that he can elevate even the most unlikely sounding of projects (have you seen Baywatch? No? Just me?) and turn them into enjoyable popcorn fare that, for at least the period he is on screen, is worth every penny of the admission price.

So Suicide Squad fans, be not afraid of the potential pitfalls of the movie sequel - The Rock has got your back.