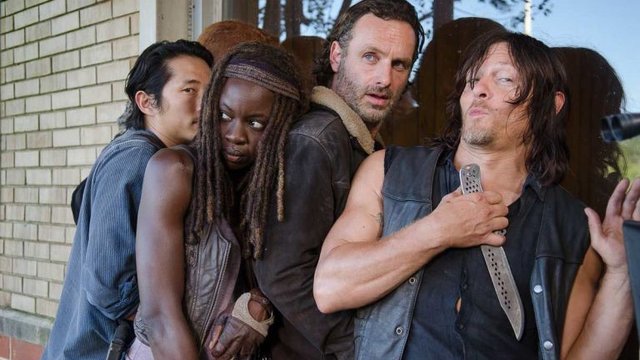 The show's eigth season is set to begin in October but there's a major conflict going down internally between the creative team and AMC.

Worrying news for fans of The Walking Dead as the creators of the TV zombie megahit are reportedly sueing AMC, the channel which airs it in the US.

Vulture reports that comic creator and executive producer Robert Kirkman has filed the suit alongside EPs Gale Anne Hurd, Glen Mazzara and David Alpert for "breach of contract, tortious interference, and unfair or fraudulent business acts", the four alleging that AMC have used their in house studio to reduce the show's licensing fee and ultimately lower the profits available to the show's creative team.

"The defendant AMC Entities exploited their vertically integrated corporate structure to combine both the production and the exhibition of TWD, which allowed AMC to keep the lion’s share of the series’ enormous profits for itself and not share it with the Plaintiffs, as required by their contracts."

This isn't the first set of legal troubles for the TV drama as former showrunner Frank Darabont has also filed his own suit claiming profits were misheld from him.

AMC have, of course, denied all allegations of wrongdoing:

"Virtually every studio that has had a successful show has been the target of litigation like this, and The Walking Dead has been the #1 show on television for five years in a row, so this is no surprise. We have enormous respect and appreciation for these plaintiffs, and we will continue to work with them as partners, even as we vigorously defend against this baseless and predictably opportunistic lawsuit."

It will be left to the courts to decide who is in the right here but the remaining worry for fans is how this will affect the show itself moving forward? If AMC win, could the creative team decide to leave? If the showrunners win, will a higher licensing fee result in the show moving around to new stations internationally? Time will tell.

The Walking Dead's eighth season is set to begin on October 22nd on AMC.