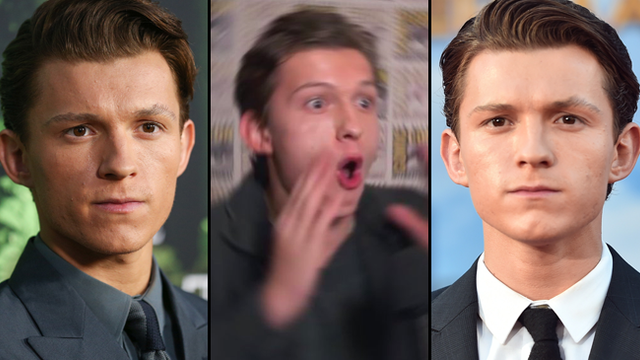 Hello. We have gathered you all here today to talk about Tom Holland. He's great, isn't he? Such a talented actor. Such a good Spiderman. But have you noticed anything... strange about him? Anything at all? No? Oh... because the internet has and now - because it is 2017 and every single day we stray further and further away from God - precious Tom has been savagely turned into a meme.

It all started with this meme created by opposume who pointed out that it looks like Tom is hiding a tiny little frog inside his mouth whenever he's posing for pictures with his mouth closed. (No idea how they decided it was a frog but we're going with it, ok?)

And since then, the meme has spiralled out of control. The frog even has a name (Dave) and conspiracy theories have started.

Then, the conspiracy theories themselves got turned into one massive meta meme.

out of all the various "tom holland has a frog in his mouth" posts, this is the best pic.twitter.com/9KKz1W8BER

Now every time he even so much as gestures towards his mouth, he gets meme'd immediately.

Absolutely no one can cope with it.

I read this thing about how Tom Holland looks like he has a frog in his mouth and he can't let it escape and I can't unsee it now. pic.twitter.com/DXiS8delb9

In fact, no... let Tom Holland get one up on these memes so he can drop the greatest interview moment of all time.

One more for the road though?