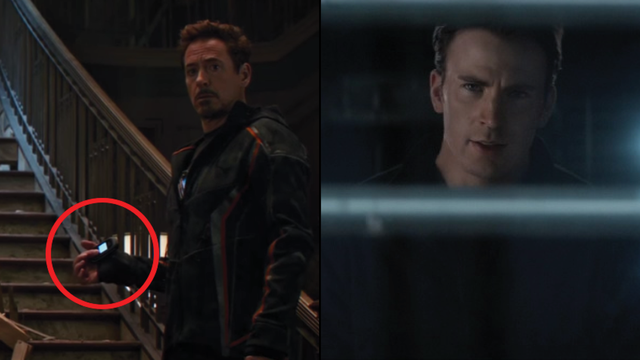 Nope, it wasn't random. You've seen this flip phone before.

Avengers: Infinity War was a wild ride for many fans. Moviegoers are still trying to process all the game-changing events of the film, but that hasn't stopped folks from noticing a tiny detail about Tony Stark's erm...tech from one scene.

Spoilers ahead, guys. You have officially been warned.

In the first few minutes of Infinity War, Tony Stark meets up with Dr Strange and Wong to lay the groundwork for the rest of the film's conflict. Sensing that Thanos' quest for power is no joke, Tony Stark decides he might need to call in the cavalry. He whips out a flip phone with ONE contact in it. The only saved number in that phone belongs to your friendly neighbourhood hottie Steve Rogers, aka Captain America.

Audiences were pretty baffled by this ancient bit of tech. "Can you believe Tony Stark, lover of technology, chose to walk around with a cheap ass Nokia flip phone just because it had Steve's number in it?" wrote one Twitter user.

Flip phones have been out of fashion since Steve Jobs killed them with the iPhone, so why does Tony Stark, billionaire philanthropist, have one?

Why does Tony Stark use a flip phone in Avengers: Infinity War?

The reason Tony Stark carries around a flip phone is actually an Easter egg guaranteed to hit die-hard Marvel fans right in the feels.

Try and remember all the way back to the end of Captain America Civil War when Steve Rogers sends a package to Tony Stark via totally regular delivery person Stan Lee. Relations between Rogers and Stark were strained throughout the film, and it was clear that their friendship was on unstable ground.

Nevertheless, after being forced into hiding, Steve wanted to make it clear that he would still be there for Tony no matter what they'd been through. Along with an emotional note, Steve gifted Tony a brand new flip phone with his phone number in it. We even got a glimpse of said phone at the end of the film.

WHEW. IT'S ALL FLOODING BACK.

siblings & I’d been confused af abt why Tony Stark had a flip phone til my brother remembered Steve gave it to him after Civil War as the only way to reach him TONY JUST HAPPENED TO HAVE IT, HE CARRIED IT ALL THE TIME IN CASE HE NEEDED STEVE pic.twitter.com/p3t7VQwjT6

Another practical reason Steve chose a flip phone and not some newfangled modern phone might be because burners are harder to trace than internet-enabled mobiles.

With tech genius Tony so plugged in all the time, Steve probably figured the best way to stay undetected but still within reach was by giving Tony the most useless piece of tech out there. There you go, folks. It's all come full circle.