Fans Have Identified One Of The Clowns On "AHS: Cult" And It's Someone You Already Know 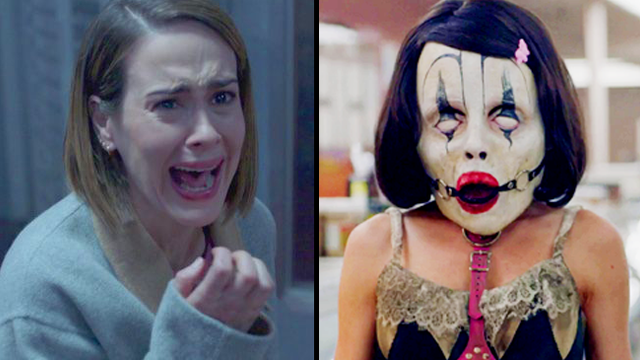 American Horror Story: Cult is in full swing now. Sarah Paulson has done more screaming in the past three episodes than she has for the last six seasons combined and half the audience is now living in fear of tiny holes and clowns. Just what we all needed really.

Fans have already started to form theories surrounding certain characters and links to previous seasons (Tate Langdon's biological son, anyone?) and they also think they've sleuthed the identity of one of those murderous clowns... and the call has been coming from inside the house.

Fans have uncovered a ton of tiny details that all point to the fact that Ivy Mayfair-Richards, Ally's loyal wife, is one of the clowns and honestly, it makes so much sense. Need some evidence?

Exhibit A) The clowns know all of Ally's fears.

THEORY: ivy is one of the clowns, that's why they know all ally's phobias#AHSCult #AHS pic.twitter.com/mBIlBGQdXT

Kai, who we assume to be the leader, makes it incredibly clear that he's all about feeding off people's fears and getting them to speak their darkest desires out loud - that's how they join his cult.

Although we see Ally beginning to warm to Kai, we know that they've never had that one on one pinky swearing in ceremony (yet). So, how would they know what about her phobias AND what triggers them? Ummm, because her clown-ass wife told them about it. Kinda weird how Ally is the OOOONLY one who has encountered the clowns and hasn't died yet, isn't it?

SIDE NOTE: Fans also think Ally's therapist could be part of the clown squad and is killing off his patients according to the fears they share in their sessions. (Honestly, it's been 7 seasons... never trust the therapist, haven't you learned anything?)

Convenient that, innit? The shady witch doesn't even believe her own hyperventilating wife when she tells her there were two clowns banging right in front of her salad at the grocery store or in her own restaurant. Either Ivy is literally the most oblivious human on earth or... she's the damn clown.

Ivy also constantly pins Ally's heightened fears and hallucinations on her mental health problems instead of believing her. Maybe it's a just a cover up... if she can convince Ally that they're not real, then the cult will be able to get away with a lot more.

Exhibit C) We've also never seen Ivy in the same scene as one of the clowns.

Seriously, every time Ally clocks a clown - in bed, in the supermarket, in the restaurant -  Ivy is nowhere to be seen, despite having been with Ally two seconds prior. That's a red flag. Stay woke, because Ryan Murphy will probably try to throw you off with an Ivy/Clown scene soon but don't let that fool you.

Exhibit D) She's got the same top and hair colour as one of the clowns.

I'm tellin y'all, Ivy's this clown!!! They literally have the same shirt, hair style, and the clown in wearing a butcher's apron! #AHSCult pic.twitter.com/BF59cxpaRZ

Listen, if we're basing this off aesthetics then THIS one specific clown is Ivy, 100%... Then again, the clowns could be using Ivy's image to terrorise Ally even more but that doesn't mean she isn't posing as a ~different~ clown.

Also, she literally changed the parental control password on the laptop to 'clownz'. Like, why would she do that when she knows her wife has coulrophobia?

*Takes a deep breath* Honestly, trust no one on this god damn show. At this point, I don't even trust Oz.