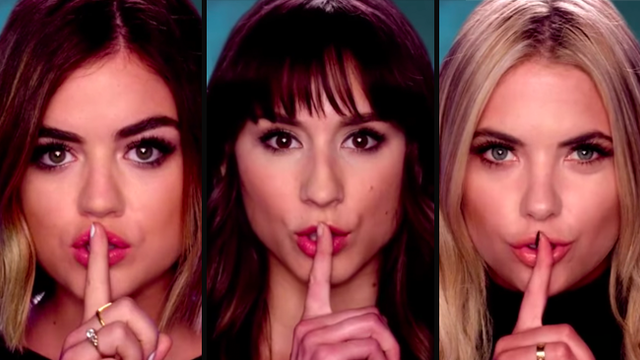 "I didn't watch 7 seasons of this for A to be someone who wasn't involved in the first 159 episodes..."

After seven seasons, many MANY plot twists, deaths, break-ups and non-stop drama, Pretty Little Liars finally came to an emotional end last night (June 27) and the identity of the infamous AD was finally revealed once and for all.

But not everyone was blown away by the final reveal. In fact, a lot of people are absolutely FUMING over the true identity of AD and the memes are lit.

If you don't want to read any spoilers... now is the time to turn away. We've warned you!

It was finally revealed that AD was in fact Alex Drake, Spencer Hasting's evil twin sister. Yes, THAT fan theory came true. In the finale, Spencer was knocked unconscious by Mona and taken to a creepy underground bunker where she came face to face with her twin. When Mary gave birth to the sisters, the Hastings family took Spencer away and left Alex to be adopted by a family from England who ultimately couldn't handle her.

It turns out that Alex had known about Spencer the entire time and had been imitating her on and off throughout the seasons. But while half the fandom was shook at the reveal, the other half were not thrilled by the big plot twist and took to Twitter to meme about it.

Wasted 7 years of my life to figure out who AD is and it happens to be a new character who is Spencer's twin #PLLEndgame #PLLGameOver pic.twitter.com/rM5cbJP5b1

The real question is why did Spencer's twin, someone irrelevant, have to be AD of all people #PLLEndGame #pllGameOver #PrettyLittleLiars

AD was supposed to be a character we knew for 7 years! Not a whole new character we just met during the finale #PLLEndGame #PLLGameOver pic.twitter.com/mYbKxNNVh2

Who wishes they could just completely remake the finale and make AD someone who makes sense? #PLLEndGame #PLLGameOver

these girls couldn't figure out a THING for 7 years but they sure cracked that twin plot in 2.5 sec flat.#pll#PLLEndGame pic.twitter.com/fWFhp3MmzF

I didn't watch 7 seasons of this show for A to be someone who wasn't involved in the first 159 episodes #PLLEndGame #PLL #PLLFinale pic.twitter.com/luGd9FdhZO

And now, thanks to all that extra drama, fans are technically left with more questions than answers.

Y'all they have 20 minutes to wrap up this show and they introduced an entire new plot line. I'm done. #pll #pllfinale #pllendgame pic.twitter.com/3WZJ0it1Tc

The floor is a finale episode with no plot holes