Ok but what if this actually happened?

The season finale of Riverdale left us with too many cliffhangers to count. Is Jughead a serpent now? Will Fred Andrews survive the shooting? Did Clifford Blossom ~actually~ kill himself? And who the jolly f*ck is Betty's secret older brother?

Yep, in case you forgot about that tiny bombshell that Alice Cooper dropped mid-way through that last episode, let us remind you. Alice invited Jughead and FP to dinner where the latter promptly reminds the Coopers of their massive argument before their own Homecoming dance - before Alice tells him to shut up. Later on, Alice reveals to Betty that she was pregnant in high school and was forced to give the baby up for adoption.

But what if the REAL reason behind the fight was because Hal was not the father of the baby... and someone else was?

So who's the dad? It's FP Jones, my friends.

Alice and FP know each other VERY well. In fact, it's pretty clear that the pair shared a fiery relationship before she cleaned up her Serpent past and became "Mrs Cooper". Remember when FP confronted Alice outside Jughead's birthday party? "You may not live on the Southside anymore, you may not dress like you're from the Southside, but we both know the truth: Snakes don't shed their skin so easily." Iconic.

Alice also tries to shut it down every time FP mentions something from their days at high school. It's entirely possible that Alice and FP were a thing back when Alice and Hal first got together and she is trying ever so desperately to keep that a secret. Also, sexual tension dot com, lads.

So, yeah what if Hal made Alice give up the baby because he knew it was FP's and not his? Well, it turns out that this theory seems even more legit when you think about WHO the frickity frack their son could be...

Please welcome to the stage, Joaquin.

Let's just lay down the evidence real quick. Betty worked out that her brother must be a few years older than her and Polly, so around 20-ish. We know that Joaquin doesn't go to school, so we can assume that he's probably a little older than our core squad. We know very little about his life; serpent, lives on the Southside, kept his surname a secret for ages...

But what's even more mind blowing is that Rob Raco, the actor who plays him, has been teasing this whole thing over on his Twitter account for weeks now. He's trolling, right?

And here's where it gets real AF. It turns out that he looks EXACTLY like the two of them when they were younger. Blue eyes, dark hair, shape of the mouth, eyebrows... This is probably just a coincidence, right? RIGHT? 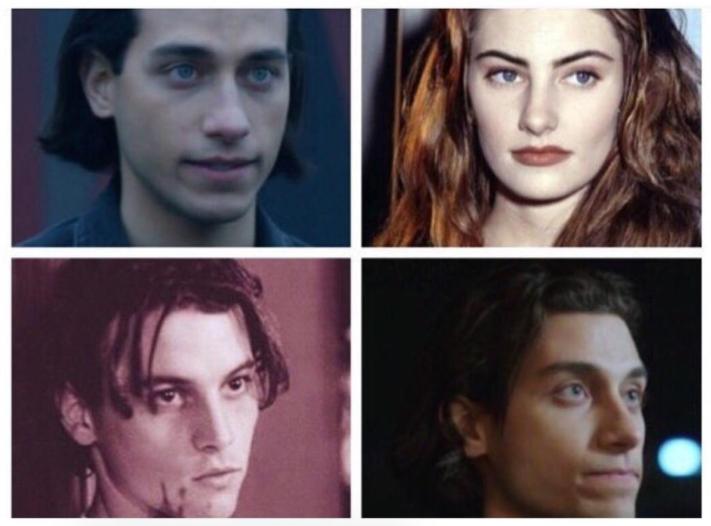 So, what do you think? Is the secret baby an Alice and FP secret love child? We are convinced. Yes. (Nightmare for Betty and Jughead, btw) And is their secret love child Joaquin? Quite possibly but the jury is still out on that one... We do not know.

What we DO know, thanks to Aguierre-Sacasa, is that Betty's brother will be introduced "in the most dramatic, unexpected way." And to that we say, BRING. IT. THE F*CK. ON.