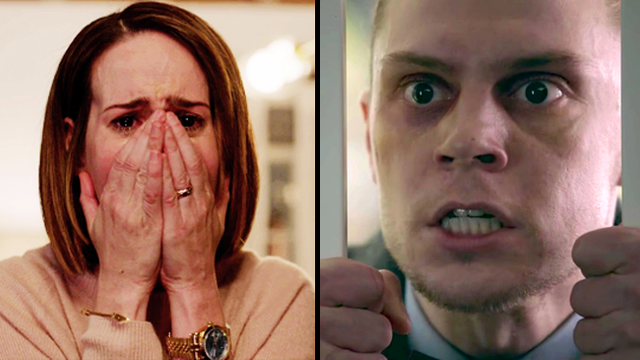 Sorry but there's no way it's Evan Peters... that's too easy. [SPOILERS]

Kids, it's time to talk about American Horror Story: Cult's insane clown posse - and who the one true mastermind behind it actually is.

Thanks to all the pinky promises and motivational speeches to downtrodden citizens of Brookfield Heights, along with the blatant reference to Meadow's illustrations of clown masks (to which he replied "we need these"), it's pretty easy to assume that Evan Peter's character Kai Anderson is the one behind the whole gig. A little TOO easy for AHS...

He voted for Trump. He lost his sh*t when Trump won (in a good way). He then attempted to run for city council in Brookfield Heights and got turned away. That rejection seemed to spur him into harassment and violence (please don't remind me of the condom full of piss...) which seems like a pretty solid enough motive for him to set up a Kickstarter for this whole murderous operation.

But things might not be as simple as you previously thought. Sure, Kai is a clearly important figure in the ~cult~ but he's not the leader and he's certainly not the mastermind behind the whole thing either. He's merely the spokesperson - the face of the operation, if you will - and here's the proof.

If there's *one* thing that American Horror Story has taught us over these past seven torturous years, it's that you should NEVER trust the therapist. The real leader of the Cult? It's your friendly neighbourhood therapist, Dr Rudy Vincent.

Remember when Ally called Rudy after she got triggered (again)? Instead of giving a damn about working her through her panic attack, he was absentmindedly playing with five pin badges on his desk. Moving each one up and down in different formations. What was on those pin badges? Smiley faces aka the signature of the killer clowns.

So not only could he be the one controlling the clowns, he is almost certainly the one feeding information back to Kai so he can carry out Rudy's dirty work under the guise of the clowns.

AHS CULT. THE FUCKING THERAPIST OBVIOUSLY HAS SOME SORT OF FUCKING CONNECTION TO ALL OF THESE THINGS THAT ARE HAPPENING TO EVERYONE

I'm calling it, the therapist is the cult leader. #ahscult

Think about it... in episode three we see Rosie spilling all her fears to Rudy in a therapy session. Five minutes later, the clowns show up at her house and proceed to throw her and her husband into two coffins - oh, what a coicidence, her biggest nightmare - and then drill them shut. They're found dead months later. Rudy is almost certainly (along with Ivy, who we now know is a snake) leaking Ally's biggest triggers to the insane clown posse but for some reason... she hasn't faced the same fate as Rosie.

So how does Rudy know Kai? In episode four, we see Kai popping a LOT of pills. Those pills are Adderall, which is a prescription drug used to treat ADHD. Now, who would have prescribed those to Kai? A therapist...

All of that now begs the question: If Rudy IS the king pin, why is he doing it? Why did he choose Kai to act on his behlaf? And is he one of the clowns himself?

OMG, you know what would be the most iconic plot twist in the history of AHS plot twists? If Dr Vincent revealed himself to be a clown at the end and pulled out the mask of... Bloodyface. Threadson's impact. I'm already losing my mind. #TrustNoTherapist