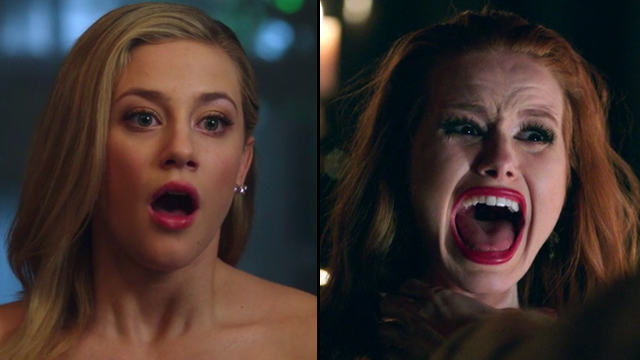 We don't know about you but we're not sure we're mentally prepared for what's to come in the third episode of Riverdale season two. Did Moose and Midge survive? Will the black hood strike again? Who is the watcher in the woods?! *stresses*

The last five minutes of the first two episodes have contained more deaths than the entire first thirteen episodes combined (that's probably not even true but it feels like it, at least.) At this rate the show - and Sheriff Keller's non-existent investigation - is going, we're looking at a body count of at least ONE per episode.

If that's the case, who will be the next to get the chop in episode three. Or, if they don't end up getting killed, who will be next to end up in that weird time-warp hospital?

To be honest, absolutely no one is safe but Riverdale's show runner Roberto Aguirre-Sacasa just teased the outcome of the upcoming episode and things aren't looking good for Ethel Muggs.

Tomorrow on #Riverdale on the #cw, it's the return of Ethel Muggs! But how long will she last with the Black Hood on the loose? Watch live! pic.twitter.com/d4Axg6gKIj

The promo teaser for the third episode also shows Ethel walking away from a car on the road, and then someone searching for in the woods.

To make matters worse, Shannon Purser quote tweeted the tweet and added her own ominous message to it. (Seriously Shannon, now is not the time for self-depreciating jokes about being alone in the dark at night, ok? It's still too soon!) 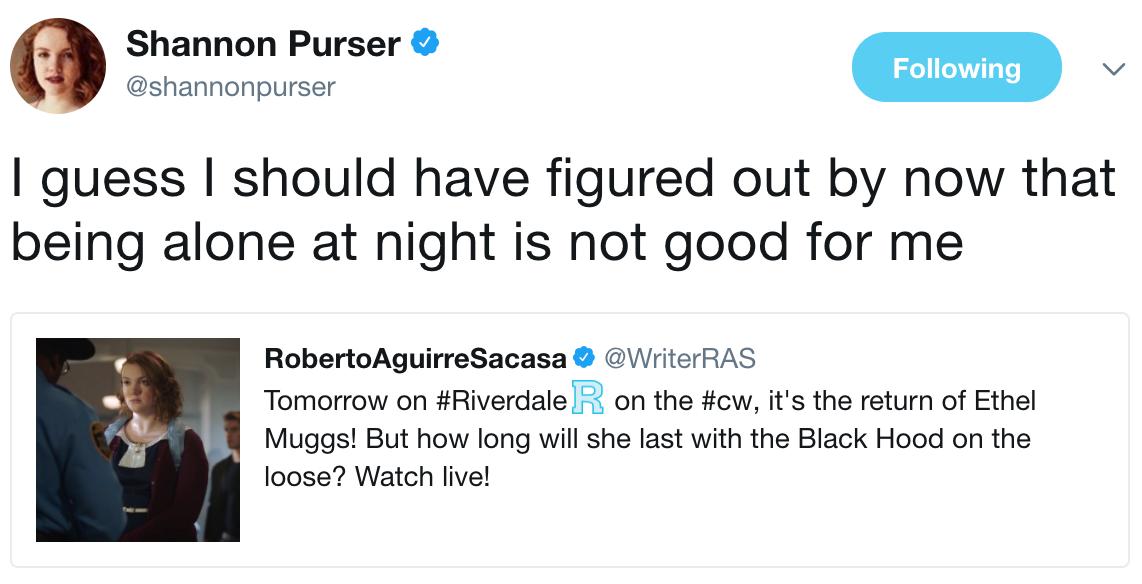 Ethel may well end up being the next victim. The show ~has~ been bringing back secondary characters and sacrificing them to the man in the black hood, after all. Shannon also isn't credited in any episodes beyond episode three either - not that that means anything because she's been missing for half a season anyway.

There is, however, reason to believe that Ethel might escape the season unscathed anyway thanks to a theory that suggests Ethel's dad is actually the killer. Reddit thinks he may have not recovered from his suicide attempt and is seeking revenge on the town and surely if that was the case, he wouldn't kill his own daughter? Right? RIGHT?

Other potential victims on the list? Dilton Doiley, Valerie from The Pussycats and Chuck Clayton but we guess we'll just have to wait and see what happens. We all know those promo teasers like to play tricks with on minds.