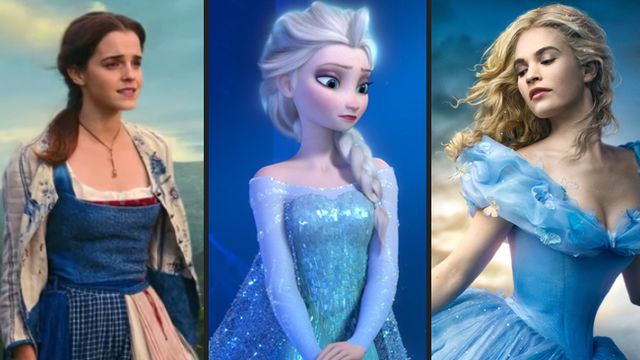 How did we not ever notice this before?

Have you ever noticed ONE thing that links pretty much every single Disney Princess to each other? Namely the fact that at some point, they all seem to have a blue outfit.

In an interview with Elle.com, designer Christopher Kane who just released a collection inspired by Beauty and the Beast, made the same observation when dreaming up his looks. "When you think of every Disney heroine—Cinderella, Sleeping Beauty, Jasmine—they're all wearing blue! It's a thing. 'Disney Blue.'"

Leatrice Eiseman of the Pantone Colour Institute spoke to Allure about the reasoning behind the choice of colour for many on screen heroines and it turns out that female empowerment is the reason.

"You're adding a bit of power to the character by giving her the blue. It's a very subtle way of saying, 'Yeah, but young women, young girls, can be empowered, too.'"

At first, it does seem a little tenuous; the idea that it's empowering for a female to simply wear a colour that society has assigned to the male gender. But when you think about it, it does kind of make sense. The title 'Princess' comes with a bunch of stereotyped connotations itself. Pink, ballgowns, tiaras, glitter, diamonds... you get the picture.

In many scenes where our heroines are wearing blue, they're kicking ass, taking names and defying their society's gender stereotypes at the same time. Ariel did her own damn thing and is now on land with the humans. Cinderella made it to the ball. Belle is actively seeking adventure outside of her provincial life. Elsa is TRULY living her best life. Blue is also a hopeful and comforting colour, as pointed out by Eiseman, and it's a perfect visual aid to signify the heightened empowerment in their characters.