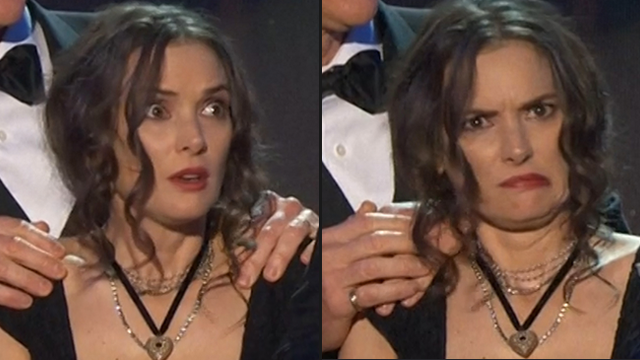 Winona Ryder has had somewhat of a renaissance over the past 12 months. The Queen of gothic realness made her triumphant comeback to the screen as the ever-so-slightly jittery Joyce Byers in Netflix's Stranger Things and we've all been stanning her ever since.

On Sunday (Jan 29), the cast of Stranger Things picked up the SAG Award for 'Outstanding Performance by an Ensemble in a Drama Series' and took to the stage to accept it with Winona in tow. David Harbour, who plays Chief Hopper in the series, did the speech but we didn't hear it because all we were concentrating on were Winona's INCREDIBLE facial expressions.

DID YOU SEE THEM?

I somehow managed to take 28 screenshots of Winona Ryder. pic.twitter.com/37hB5yamSS

Winona literally provided us with enough GIF reactions for the next 2 years. In fact, here are some pretty specific situations in which you can use them:

1) When you send a risky text and then realise you sent it to the wrong person.

2) When the DJ drops an unexpected BANGER.

3) When you overhear someone talking about your favourite band but then they start dragging them instead.

4) When they start roasting your least favourite friend in the group chat...

5) But then they switch and start roasting you...

6) When you're the last one to get the joke.

7) When your crush likes one of your selfies.

8) When you see someone you know in public and you notice them approaching.

9) Whenever your crush opens their god damn mouth.

10) When someone problematic says something that you low-key agree with.

11) Whenever someone mentions that Barb deserved better.