People Are Fuming Over These "Sexist" Justice League Costumes 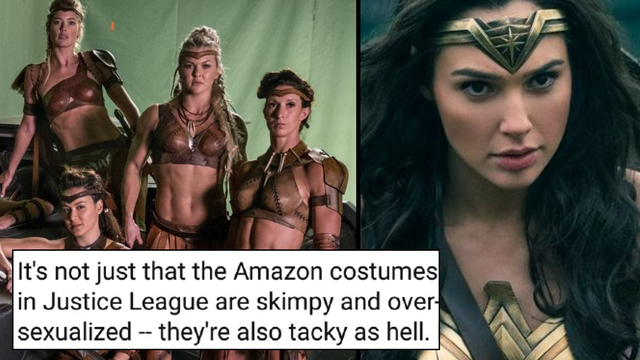 The internet is divided over whether the costumes are sexist or just bad costume design.

Ask any Wonder Woman fan which parts of the film stood out and they'll probably mention the fight scenes set in Themyscira. Patty Jenkins' summer blockbuster set up the perfect no-men-allowed paradise complete with gorgeously choreographed training and battle scenes.

Many people have noted how Patty Jenkins' directing in Wonder Woman sharply veered away from the male gaze--a refreshing take on a genre rife with women fighting in skimpy nonsensical outfits.

As Justice League hits theatres this month, some Twitter users seem to have found a gripe with the "new" armour of Diana's people.

When gender equality advocate Melissa Silverstein tweeted the difference between the battle armour in Wonder Woman and the armour in Justice League, she probably didn't realise how seriously people would take her critique. 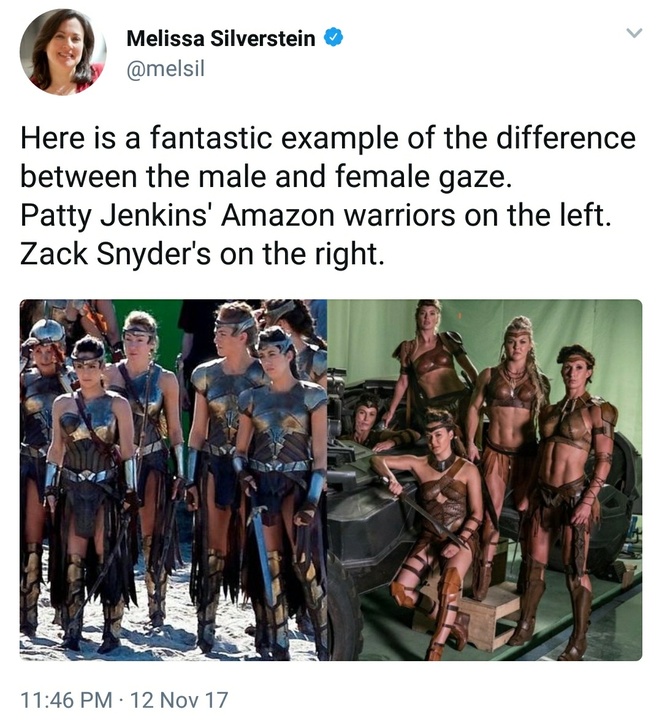 Melissa invited people to note the difference between the fight gear in a Patty Jenkins vehicle vs. the ones in the Zack Snyder directed Justice League film.

In truth, both sets of armour would fail spectacularly in actual battle, but the Justice League costumes would leave every single vital organ exposed.

People were understandably ticked off at the bikini armour because, like, what the hell? 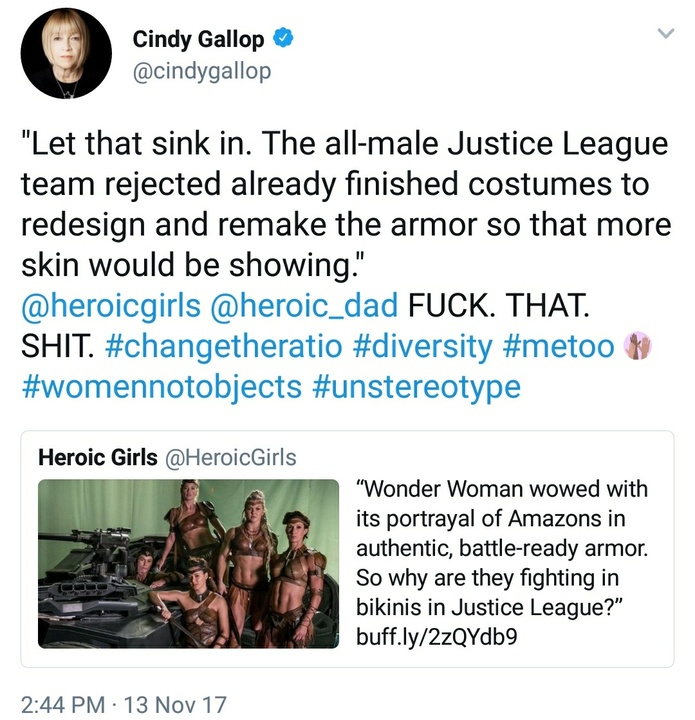 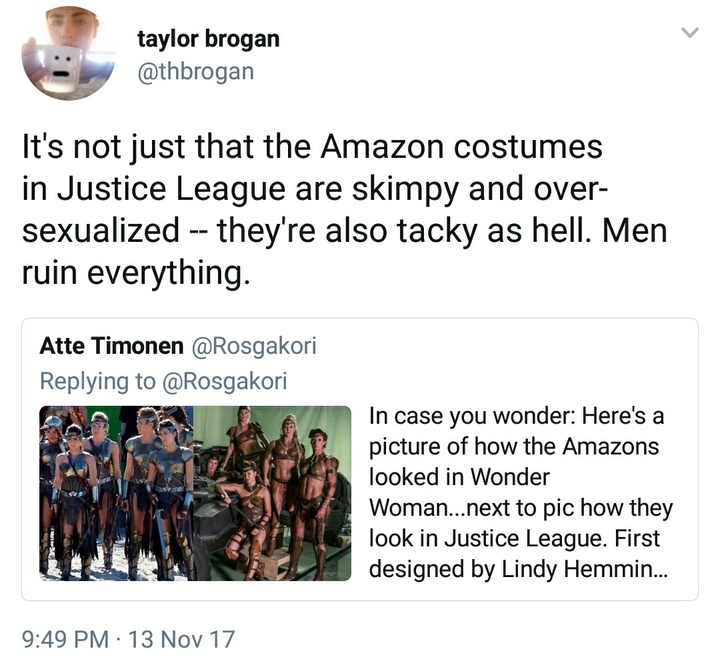 But wait. The plot thickens.

Some started pointing out that the costumes weren't actually all that different from the training outfits worn in Wonder Woman. 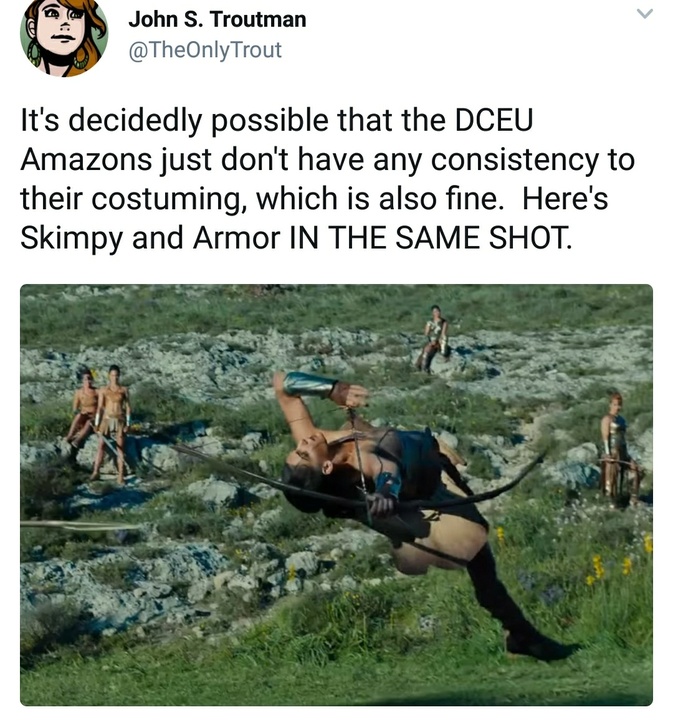 Here we can see similarly "skimpy" outfits worn in a training scene, casting small doubt on the idea that all the costumes were specifically sexed up for Justice League.

Others contended that this "new" Justice League gear was actually from a flashback to pre-historic times. 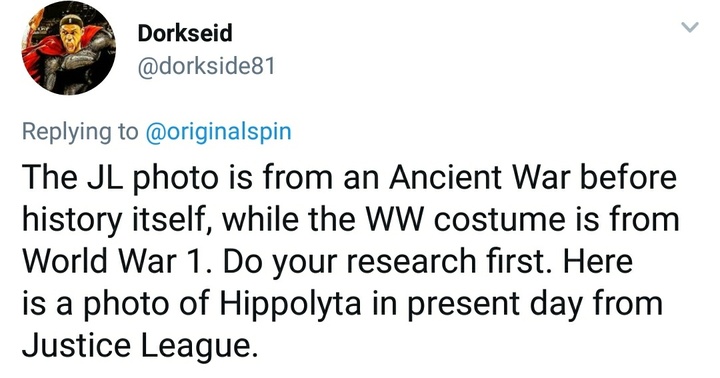 In the trailers for the film, the Amazons can be seen riding into battle wearing the skimpy bikini outfits. In a voice-over, Diana describes this as "long before I was born", so the pre-historic angle definitely checks out.

But, if they were able to craft weapons made of steel (at least one Amazon can be seen wielding a sword in the trailer), would they not be able to craft battle armour made of the same material? And, being that they are a warrior class, wouldn't adequate armour be kind of a huge priority? My head hurts.

Twitter user @Rosgakori helpfully pointed out that no one was really "wrong" or "right" here. 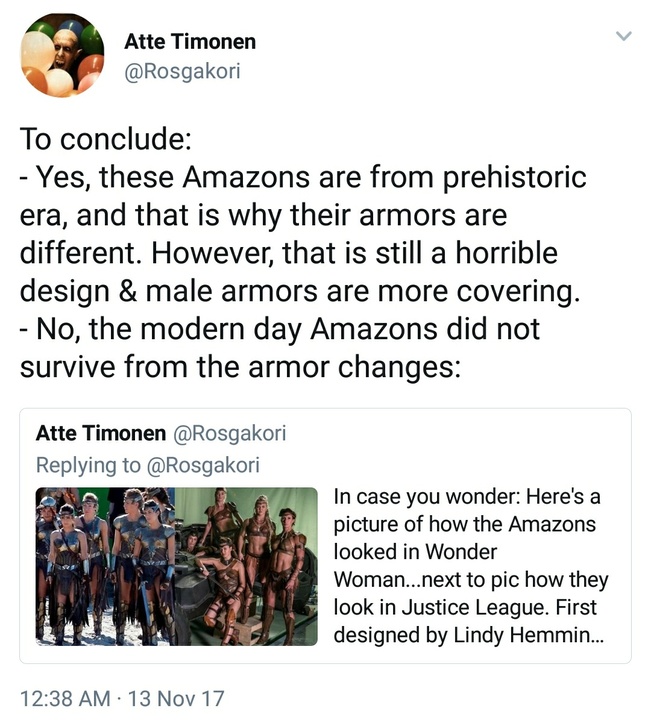 Essentially, the pre-historic Amazons would potentially have different armour than they would in modern Themyscira but that doesn't make the pre-historic bikini battle armour any less stupid.

In conclusion, movie costume design can be weird for 100 different reasons. One fact still remains, we need to stop acting like women riding into battle wearing bikinis makes any type of sense.