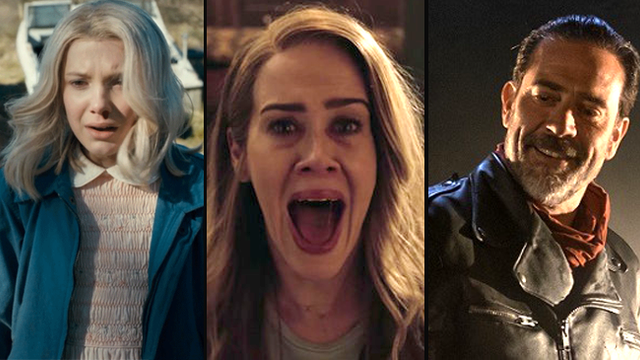 You might have to wait a bit longer for "American Horror Story" season seven...

We don't mean to alarm you or anything but there's a very strong possibility that your favourite TV shows are about to be delayed with some ending up getting cancelled altogether. And it's all to do with a big writers strike in Hollywood that may or may not about to happen.

What is a writers strike when it's at home anyway?

Almost every writer in Hollywood is part of a union. One of the big writers unions is the Writers Guild Of America. A few days ago, a vast majority of members just voted to authorise a strike in order to urge producers and networks raise the minimum wage and increase residuals from streaming services to account for the shorter episode orders that many cable and streaming TV shows are now doing.

Back in 2007, the WGA were on strike for 100 days. The majority of scripted shows that were in production at the time were either pushed back or forced to air a shorter season. (That's the reason why there's that one annoying short season on your favourite show like Grey's Anatomy, LOST, One Tree Hill, 30 Rock and Supernatural.) This time, however, the voter turnout and eventual result is WAY bigger than before so we could be looking at an even bigger impact.

So what's going to happen to your favourite shows?

If the WGA decide to strike again, any shows with writers in the union will have to be delayed. The writers would be able to start striking as soon as May 2. Depending on how long it takes to arrange a new deal with studios and networks, a LOT of your favourite shows will almost definitely be delayed.

What will happen to American Horror Story?

As we all know, the scripts are being written and polished for AHS right up until they start shooting that exact episode mainly so that no spoilers can escape but also details are able to be changed at the drop of a hat. Ryan Murphy is currently at work, writing the scripts for the season but if the strike is given the go ahead, we might have to wait even longer for the Election-themed season.

The rest of Murphy's shows, Feud season two and both seasons of American Crime Story, might also be affected.

What about The Walking Dead?

Like American Horror Story, The Walking Dead is due to air around October time and will be heading into production over the summer. But if the writers are on strike, there'll be no one to write the scripts. And if there's no one to write the scripts then you won't be getting a single second of screen time from Negan. At least your favourite character will be alive for a little while longer though, right?

SNL would have to cut their last three episodes of the season and that means saying goodbye to hosts Melissa McCarthy, Chris Pine and *weeps gently* Dwayne 'The Rock' Johnson.

Network shows usually tend to start production around the summer time so depending on how long the strike lasts, the second season of Riverdale (which would potentially air in January 2018) might find itself being swept up in the tail end of the strike and could be delayed ever so slightly.

WHAT ABOUT STRANGER THINGS?

Thankfully, it looks like Stranger Things will NOT be affected by an upcoming writers strike. The scripts have already been written and the cast is currently shooting episodes 8 and 9 of the second season so we are all good to go when it comes to The Upside Down. A lot of your favourite Netflix shows should be safe, seeing as they're all written and shot before being released in their entirety.

The same goes for Game Of Thrones. So you can stop hyperventilating about that. Here's hoping a deal can be agreed upon fast.