We Bet You Missed The Zoella Reference On "Gilmore Girls: A Year In The Life" 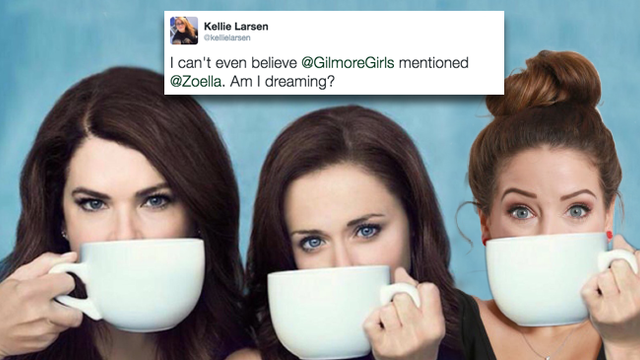 “...checking your Facebook or answering your emails or YOUTUBING ZOELLA!"

Guys, the most 2016 thing has just happened and we're still trying to wrap our heads around it. Unless you've been living under a Netflix shaped rock, you'll know that the brand new Gilmore Girls reunion A Year In The Life dropped last weekend.

If you've been keeping track of all the pop culture reference in Gilmore Girls: A Year In The Life (something the original show is famous for), you may have spotted a few up to date references about Lena Dunham, Brangelina (RIP), Skrillex, Vine (RIP) and you guessed it, Game of Thrones. All so very 2016, we're sure you'll agree.

But you may have missed the fleeting reference that everyone's problematic fave Taylor Doose makes toward the UK's very own internet vlogging sensation, Zoella.

Does @Zoella know that she's ACTUALLY made it? There's really no topping making it into Gilmore Girls #GilmoreGirlsRevival pic.twitter.com/0884P01kDN

In the scene (in "Winter" around 1hr 11mins into the episode), Taylor goes off on one about how all people care about it being connected online and that Luke's wifi password is wrong on purpose to make sure that people aren’t constantly “checking your Facebook or answering your emails or YouTubing Zoella." Yep, for real... 2016 everybodyyy! *drops mic*

Needless to say, Twitter absolutely exploded when they tuned in to the first episode.

Marked out like a crazy person at the @Zoella reference on @GilmoreGirls. Literally the most exciting thing that could happen to a person.

But not everyone seemed to be as impressed.

Referencing Zoella in Gilmore Girls.. what has the world come to.

Can we talk about @GilmoreGirls mentioning @Zoella in the first episode?! What is this

Can’t believe Zoella gets a mention in the new Gilmore Girls. What did she do to earn this? At least she gets called “Zooella”.

And what's even more crazy is that Zoe hasn't even responded to it yet! WAKE UP SIS! Being referenced in the Gilmore Girls is like winning the damn lottery!

Lena Dunham, on the other hand, is absolutely LIT right now.

Being referenced in the new Gilmore Girls cured every ailment I've ever had I love you Stars Hollow!

Whaddya think of the Zoella reference then? Are you screaming out how proud you are of Zoe or do you literally not even care? Let us know in the comments!