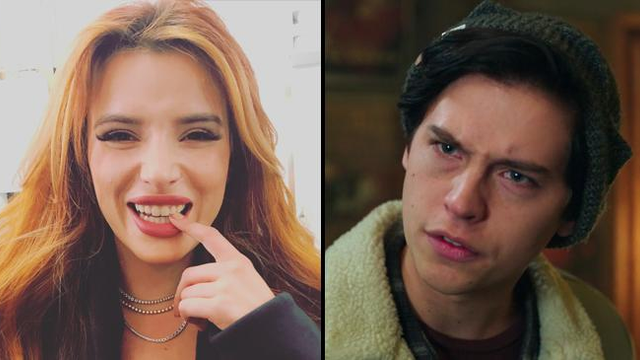 Dylan Sprouse. Jake Paul. Lucy Hale. Caleb from Pretty Little Liars. What do they all have in common? They're all actors who have been rumoured to be joining the cast of your favourite show, Riverdale. Honestly, not a day goes by where there isn't a new casting rumour about this show and now, actors on Twitter have started getting involved in the conversations themselves.

So who's been fishing for a gig on the show this time? Bella Thorne, of course.

One fan tweeted Bella saying they think she should appear on Riverdale as Cheryl Blossom's long lost twin sister because they "look similar" and have the same hair colour.

Bella then replied to the tweet saying it was an "awesome idea," because of course she did!

Despite the fact that Cheryl already has a twin (Jason, in case you weren't paying attention to the show at all...), we can't help but gag at the idea that Cheryl has another secret sibling - or triplet. Or maybe Jason wasn't even her real twin in the first place. Actually, thinking about it, this all sounds like a terrible idea... maybe we should all just leave Cheryl alone in peace at this point.

As for the casting of Bella Thorne in that role in particular? It sounds like the majority of people aren't on board with it... which wasn't a surprise.

no it’s a horrible idea

"It's a no from Simon and myself" pic.twitter.com/dCbxoIZrrk

I don’t think they could really make that happen, Jason was her twin. As much as I admire both actresses and the show, that would just be a bit ridiculous. I’ve even thought the same thing, but I feel like it would be a useless storyline.

But some people are TOTALLY down with though and they're even pitching storylines for her potential character.

@bellathorne being part of the South Side Serpents would be EVERYTHING pic.twitter.com/CrHznfg3od

ill say it, @bellathorne should be on riverdale

Cole Sprouse confirms break up from Lili Reinhart in March