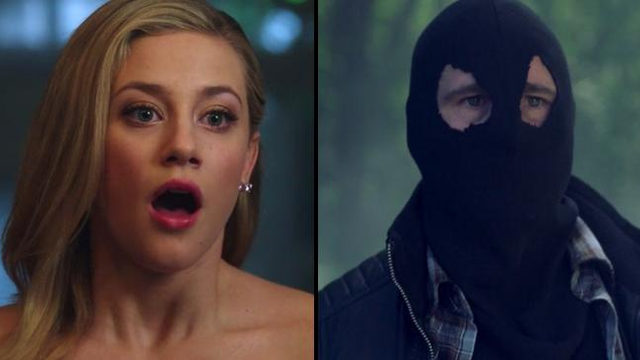 "The identity of the killer shifts week to week..."

For the past five weeks, we've all been tearing our hair over who the killer might be on Riverdale. Things we already know about the Black Hood include: She/He knows Betty well enough to know detailed things about her childhood, they were present that night at the Jubilee when Betty gave her speech and they know everyone's business (Fred's adultery, Ms Grundy's underage targets...)

But all of that might not even matter because show-runner Roberto Aguirre-Sacasa dropped a massive bombshell about the identity of the Riverdale killer and you're not going to like it.

When asked about why the writers didn't pin point the killer first and then build the story from there, he replied: "What we did last year and what we did this year is we came up with a list of three suspects that could have been Jason Blossom’s killer and could be the Black Hood. And we built the seasons with those three suspects in play so we have options as the show develops, and we’re also making sure we’re doing our homework in terms of red herrings and stuff."

So, to reiterate those points:
- The writers have not actually decided who the killer is.
- They do not have one specific killer, they have three potential killers.
- Each week, the killer's actions could be written with a different suspect in mind.
- They have been building the story around those three suspects and covering all three of their bases and motives as they go.
- And when the season is drawing to a close, they'll then decide who the killer is based on the options they have left.

Oh, and in case you didn't notice RAS doesn't use pronouns when describing the kill, so it could still be a woman...

We honestly can't decide if that's an absolutely brilliant idea or if that's just being a little bit sneaky toward the fans. The big reveal of Clifford Blossom being the one who murdered Jason at the end of season one didn't exactly blow people's minds so whatever happens, we just hope that what they're cooking up will send our wigs flying into orbit - while still making complete sense.

Looks like we're each going to have to have three theories on hand for when the big reveal is finally made. Start mapping your suspects boards, cross off your suspects as you go and grab the Red Bull... this investigation just got REAL.