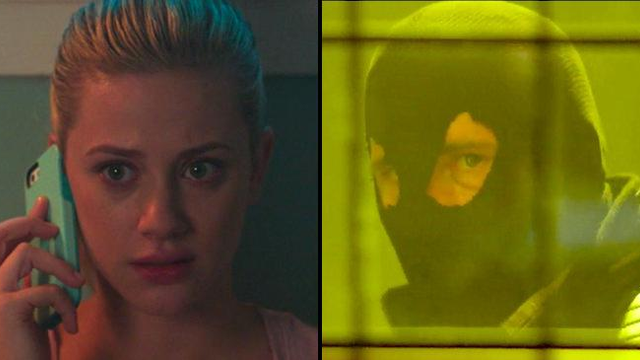 Have we FINALLY cracked the voice behind the phone calls?

The battle rages on to crack the case of the mysterious Black Hood killer on Riverdale and the theories are still coming in thick and fast. This week, Kevin Keller has entered the ring as one of the suspects but we have a feeling this new piece of evidence might sway you to believe otherwise...

In episode 5, when The Black Hood starts calling Betty on her cell phone, we hear a distorted voice on the other end of the line. It’s pretty clear that whoever it is, is using some kind of disguise because duh, no one talks like that IRL.

But seems like we may have cracked it because one fan - @Chloe1D - took things even further by altering the distorted voice and restoring it to a normal speaking pitch and well… it looks like she might have identified the person on the other end of that phone line.

While this piece of cold hard evidence is incredibly convincing, we can’t help but wonder if it’s just another red herring that show-runner Roberto Aguirre-Sacasa and those pesky Riverdale writers have laid down to trick us and throw us off the scent. Surely they wouldn’t spill something so simple that even the most amateur sleuth amongst us could crack almost immediately, would they?! OR WOULD THEY?! Right in front of our salads?!

Fans on the Riverdale subreddit have pointed out that the voice in the call gets harder to identify the longer the call goes on. So while it sounds like it's Hiram voice at the beginning, the rest of the call doesn't actually sound like him at all because it's been distorted a lil' too much.

Maybe Hiram is just using the identity of the Black Hood to drag Veronica away from her friends and the REAL Black Hood hasn't even picked up the damn phone in the first place? Oh god, I need to lie down.

In case you missed it, RAS confirmed in an interview that the writers currently have THREE suspects for the Black Hood in mind and they haven’t actually decided on who will eventually get revealed at the end of the season. So while it DEFINITELY sounds like Hiram Lodge’s voice for now, we’re willing to put some money on the fact there’s gonna be a lot more twists and turns until we find out the real identity of the Black Hood.