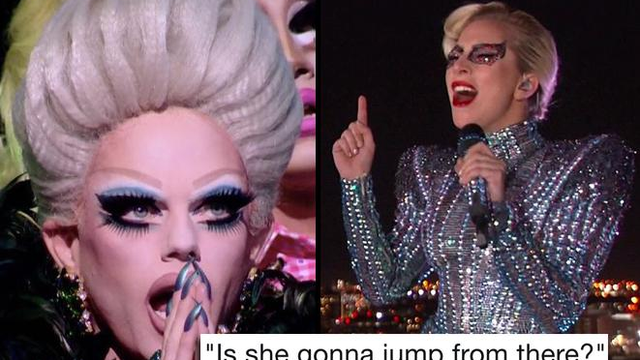 Is she gonna jump from there? Because these memes will go DOWN in All Stars herstory.

RuPaul's Drag Race All Stars 3 returned to our screens for another season of legacy lip-syncs, brutal elimination sabotage and gag-worthy death drops in January and the Twitterses and the Tumblrses have been gagging ever since. After just one episode, the memes started rolling in faster than Aja managed de-wig everyone in the audience - and they haven't stopped.

Here's a complete list of every single All Stars 3 meme that the internet has given us, so far. Hallelu.

When Milk uttered the now iconic words "Is she gonna jump from there?" about Aja's absolutely WIG SNATCHING death drop in the talent show... a meme was born thanks to Morgan McMichaels.

My friends when I draw premature conclusions. #AllStars3 pic.twitter.com/rPiJJjBPCV

In fact, Aja's portion of the talent show was nothing less than ICONIC.

You during a fire: stops, drops, and rolls

Me, a Drag Race fan, during a fire: #allstars3pic.twitter.com/nnoM0skflF

#AllStars3
Him: I'm single
Me: pic.twitter.com/hZZKUMWS0v

this is the kind of glo up i need in 2018 #AllStars3 pic.twitter.com/m1DhLNtRlj

Doctor: you have 48 seconds left to live, me: #AllStars3 pic.twitter.com/uKGPcgqKaS

Somewhere across the dazzling waters of Darienne Lake, Miss Darienne herself is SEETHING.

Someone paused during Trixie's talent segment and ended up with the most iconic screenshot of all time.

Trixie's reaction to Bendelacreme's lip sync was too much.

Trixie in general was too much.

"mom said it's my turn to use the Xbox" pic.twitter.com/8y60cpAjVz

Will Morgan get her ruvenge? Or will Miss Anxiety and Dee Pression claim her once and for all?

Um, literally NO ONE agreed on how to eliminate when it came down to it.

All the queens when bendelacreme said they came to a consensus on how to eliminate eachother #AllStars3 pic.twitter.com/7nhfozr4IB

Thorgy's reaction to being eliminated will go down in herstory.

Straight couple: *makes out in public*

The FBI agent in my phone pic.twitter.com/GKcTXL4XaS

Thorgy and Kennedy, your looks on the runway were... anime-zing.

Even Thorgy's attempt to form an alliance has been memeorialised.

me as a femme/closeted middle schooler developing a pseudo-friendship with the kid who eats boogers pic.twitter.com/S5dHs48IP7

Milk's tantrum after safely sailing through to next week was meme-worthy.

I was in character the entire time and to be standing on that stage and not (sniff) not be commended for it, it’s STUPID(sobs) i was in 8 of the 10 numbers and i DID the goddamn thing

Me after watching #AllStars3.. pic.twitter.com/GDRYyXYoWI

The only super bowl I care about pic.twitter.com/RakKcvkvsA

@trixiemattel looking like she's about to beat the shit out of a young Tonya Harding pic.twitter.com/WxW2SElK3Z

Life really does come at you fast.

Shangela, your runway look was... corny... but in the name of Te Fiti, you are safe.

The time has come! For you to lipsync! Against Bendelacreme!

And when she faked our Trixie in the elimination? WIGS WERE LOST.

When Trixie takes off her wig in the opening scene of every ep of All Stars pic.twitter.com/JJpHmq5KTb

Great memes. Incredible memes but where were you when DeLa made the most shocking elimination choice in Drag Race herstory?

when i'm at a straight club and ed sheeran comes on for the third time pic.twitter.com/VHkqfcAGi9

“Honestlyyy... it’s just líke a Reallly hard decisionnn?.. that for me Personallÿy isn’t going to be easy because in My Position of power¿ it’s very difficult to choose something like this.. and I l¡ke totally love everyone but at the end of the day it’s just gotta like hâppen..” pic.twitter.com/SLPAOccrMZ

How we all felt after Aja was denied her spot back in the race after DeLa's elimination:

Me on Aja during season 9: ‘She needs to go home ASAP’
Me on Aja after All Stars 3: pic.twitter.com/1feQlrhHD7

Anyone ever noticed how...

bebe : *did the bare minimum*

Trixie: *puts effort into her look and lyrics and characterization* Adam Lambert: "I dunnooooo...you were standoffish when I worked with you :/ "
Bebe: "ra tiki tiki ta ta"
Adam Lambert: "YOU BLEW ME AWAY OMGGGG, TOP 2!!!!!! WHAT LANGUAGE IS THAAAAT!!!!! "#Allstars3

The world of drag has truly HAD it with Shangela's Game of Thrones references.

SHANGELA: Oh, alright, Miss Sansa. I see you. I see what game you're playing.

The year according to Jinkx Monsoon: 'It was pretty crazy when RuPaul forgot my name'