The 'RuPaul's Drag Race' Season 10 Finale Was A Hot Mess

They did the MOST.

It takes a lot to shock a Drag Race fan. In the 10 years since the programme's been on, we've had physical fights, self-eliminations, plinth-to-floor death drops, Raven losing out on the crown TWICE, and Tammie Brown, well, being Tammie Brown. But nothing could prepare me for the insanity that was the Season 10 finale.

It started off well enough, with a resplendent celebration of the OG queens bar Tammie Brown, who I can only assume was busy walking children in nature during filming. We got to relive the glory of legendary contestants Ongina, Nina Flowers and of course Bebe Zahara Benet, and watch the Season 10 contestants sashaying down the runway in their high-budget, best I've-been-on-TV drag. We cheered with The Vixen as she raised a black power fist, and cried out "Miss Vanjie" as the season's viral megastar stomped backwards up the runway, bellowing out her now-famous catchphrase.

But all the splendour and wonder of the glitziest TV event of the year was undermined by a desperate and extremely messy Lip Sync For The Crown. And no, it wasn't all Asia O'Hara's fault.

The top four all looked as laughable as each other in their pre-reveal lip sync outfits; most so Aquaria, who resembled a takeout box with legs, and Eureka who looked like the demonic lovechild of Latrice Royal, Trinity Taylor and a space alien. What was most disappointing was that, in their desperate attempts to recreate the magic of Sasha Velour and Peppermint's iconic Season 9 finale reveals, each queen forgot the most important feature of a mid-number costume change - the element of surprise.

First up in the lip sync smackdown was Kameron and Asia. What should have been an iconic battle between two fabulous stage performers descended into perhaps the most tragic reality TV moment of all time as Asia pulled dead butterflies out of her giant cannon boobs while Kameron gave us the same lip sync she gave us three times before during the season. It was not the ending Asia deserved, having given us the full C.U.N.T plus a healthy dose of heart all season; but one has to question the judgement of a person who decides to pin all their hopes on a handful of insects. Still though, the close-up of Asia's highly uncooperative butterflies chilling on the stage floor felt like a needlessly cruel dig at a queen who has been nothing but kind all season. But in truth, Asia's problems started long before butterfly-gate. The outfit itself was the very opposite of what we love Asia for, aesthetically speaking, and didn't suit a Janet Jackson number at all. Even without the stunt fail, Asia pretty much handed the Lip Sync to Kameron. It's the great injustice of the Lip Sync For The Crown Format - Asia is clearly the superior queen, but down due to a couple of poor decisions on the night, she places below a queen who didn't bring nearly as much to the competition.

But just when you thought the mess couldn't be out done, Aquaria and Eureka take the stage for an insane performance of "If," which proved neither have any sense of restraint when it comes to performing. The performance was truly exhausting to watch - Aquaria throws herself on the floor and squirms like an injured woodlouse as Eureka transformed her ugly purple dress into an even uglier red dress, Aquaria flies into a cartwheel as Eureka drops into the splits, there are somehow four costume changes between the two of them... it was all entirely too much, showed zero discipline, and made them both look quite desperate in this reviewer's humble opinion.

For reasons unbeknown to me, RuPaul decided that Eureka and Aquaria's lipsync was so good that they both deserve to face Kameron in the final. Whether this was because she truly felt they were both worthy, or she wanted to limit the odds of Kameron becoming America's Next Drag Superstar, this decision completely ruined the final moments of the year's competition, because watching three people lip sync at once is hard work, especially when they're as camera-thirsty as this final three. Again, we're faced with untold numbers of cartwheels and backflips, Kameron dragging her vagina across the floor for the 100th time, Aquaria running around the stage like a first year uni student on pills, and Eureka stomping around off-beat. I felt that Aquaria was probably the strongest, but there was so much going on that I can't actually be sure.

In the end, Aquaria took the crown. While I wanted Asia to win, Aquaria is a very deserved winner; she's consistently turned looks, she won Snatch Game, she's used her privilege to call out racism in between episodes, and she's matured into a queen whose personality is just as exciting as her outfits. But with such a scrappy final sprint to the crown, her win didn't have bring the same level of satisfaction as others' have in previous years. 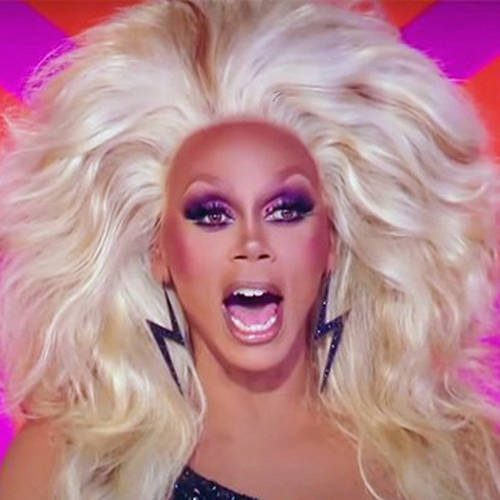